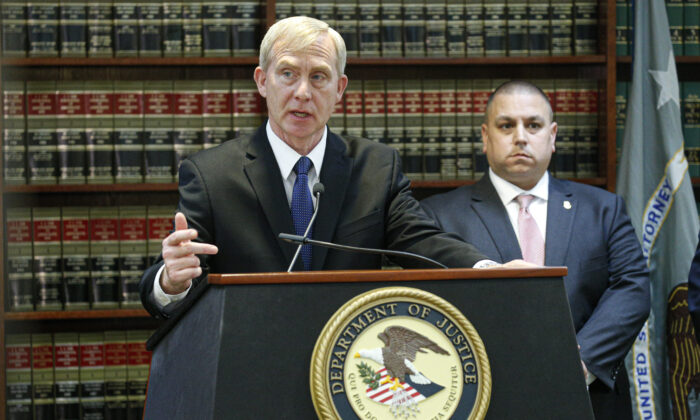 NEW YORK—Federal prosecutors have filed criminal charges accusing a New York company of illegally importing and selling to the U.S. military surveillance equipment made in China with known cybersecurity risks.

In a criminal complaint unsealed on Nov. 7, the Department of Justice (DOJ) said that Aventura Technologies, located in Commack, New York, was illegally selling the equipment to the U.S. government and private individuals, and have pocketed $88 million from the fraudulent activities.

Prosecutors allege that the company falsely labeled the products as being American made, while in fact they were mainly imported from China, in a scheme that ran from 2006 until recently. Some of the equipment had known cybersecurity issues, the DOJ said.

Six of the seven current and former Aventura employees charged were arrested on Nov. 7, including Jack Cabasso, the man accused of leading the scheme.

Aventura’s major clients include the U.S. Navy, the U.S. Air Force, the Internal Revenue Service (IRS), and other federal bodies.

By the end of 2018, Aventura had sold $20.7 million of security gears to the U.S. General Services Administration by lying about products’ country of origin. The Department of Treasury, another customer, had paid $16.9 million to the company as of Sept. 9, 2019, according to the complaint.

By labeling the Chinese products as American made, Aventura was able to charge a premium on its customers, the statement said. Aventura does not manufacture anything of its own, it added.

“Greed is at the heart of this scheme, a reprehensible motive when the subjects in this case allegedly put into question the security of men and women who don uniforms each day to protect our nation,” said William Sweeney, the Federal Bureau of Investigation Assistant Director-in-Charge.

Two of the Chinese manufacturers that supplied Aventura with equipment are known for producing firmware with security flaws, according to court documents. The National Defense Authorization Act, signed into law on Aug. 13, 2018, prohibits government agencies from buying video surveillance and telecommunications equipment from one of the suppliers due to national security concerns, according to the document.

“Aventura not only defrauded its customers, but also exposed them to serious, known cybersecurity risks, and created a channel by which hostile foreign governments could have accessed some of the government’s most sensitive facilities,” prosecutors said in the statement.

In one instance, the U.S. border patrol agents intercepted a shipment from China to Aventura in April 2019, which contain a laser-enhanced night vision camera matching the specification of a $13,500 order placed with the company by the U.S. Navy. The same camera was delivered to Naval Submarine Base New London in Groton, Connecticut two weeks later.

In September 2018, the Department of Energy ordered $156,000 worth of networked automated turnstiles from Aventura, specifying that they must be domestically made. In January 2019, the customs officials intercepted turnstiles from a Chinese supplier that matched the order, which was delivered to the department in February 2019.

In August 2018, an Air Force officer observed Chinese characters on the built-in screen of a body camera from Aventura. An analysis later conducted by a specialist found “numerous indications” that it’s from mainland China, including that the camera contained a preloaded image of the Ministry of Public Security logo and the logo of a Chinese manufacturer. The camera was one of 25 body cameras the U.S. Air Force purchased for their security personnel.

The defendants had gone to lengths to conceal any footprint of the products Chinese origin, prosecutors said,including requiring a Chinese supplier to erase its initials from the product’s circuit board.

“In today’s global economy, ‘Made in the USA’ is too sacred of a mark to fraudulently use for one’s self interest,” Larsen said.

According to court papers, U.S. authorities have seized $3 million and a 70-foot luxury yacht from Cabasso, but believe he has other assets offshore.

Aventura and the seven defendants faces charges of unlawful importation and conspiracy to commit wire and bank fraud. Cabasso and his wife, Frances Cabasso, were also charged with money laundering through shell companies, and misrepresenting the company as a “woman-owned” small business in order to obtain access to special government contracts.