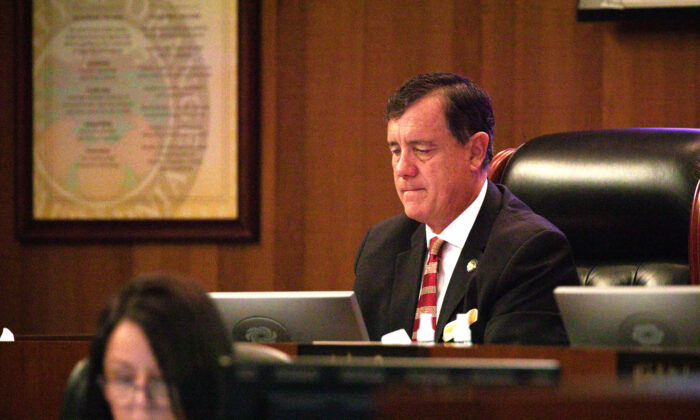 “Governor Newsom has specifically threatened to withhold Federal funds to ‘disobedient’ counties that develop their own safe reopening plans in response to local needs and local conditions,” Wagner wrote.

A request for comment from Newsom’s office wasn’t returned by deadline.

Newsom’s office released a “Blueprint for a Safer Economy” plan in late August, and announced the state would eventually start factoring in the “health equity” of counties when deciding whether they could advance to the next color-coded tier in the reopening process.

The details of the health equity measurements are still pending, but they will be designed to reflect a county’s ability to address the most impacted communities within the population, according to the California Department of Public Health (CDPH).

“The California Department of Public Health is committed to health equity and collecting more detailed racial and ethnic data that will provide additional understanding for determining future action,” the CDPH stated in a Sept. 18 release.

“Health outcomes are affected by forces including structural racism, poverty and the disproportionate prevalence of underlying conditions such as asthma and heart disease among Latinos and African American Californians.”

Wagner said the Centers for Disease Control and Prevention (CDC) had already provided the needed guidelines for counties to deal effectively with the pandemic. He argued that the evidence shows that children should be returning to school and adults should be returning to work, while those who are most at risk should be the ones who stay isolated.

“The best available scientific and epidemiological research tells us we can safely reopen,” Wagner said in a Sept. 18 statement.

Wagner said that according to the CDC, more than 95 percent of the nation’s deaths have been accompanied with one or more comorbidities, while less than 0.2 percent of the country’s confirmed COVID cases have resulted in the death of a person under the age of 50.

“While each death truly is a tragedy, science has identified the overwhelming number of people who are at risk. We should protect those older and at-risk citizens while opening up the rest of society,” Wagner said.

“Our families, businesses, churches, and schools want to reopen,” he wrote in the letter.

Orange County has had a number of other public disagreements with the state government this year.

In April, Newsom made the decision to order a temporary “hard close” of the beaches within Orange County, while allowing beaches in other counties to remain open.

“It is a complete slap in the face to local control, and has nothing to do with health,” Whitaker said at the time.

In closing the beaches, Newsom said, “We want to work very closely with local elected officials, and we’re committed to doing that. And if we can get some framework and guidelines to get this right, we can reopen very, very quickly. But we’ve got to make sure we can get this right.”

Wagner mentioned the incident in his letter to Trump, arguing that the county was being unfairly targeted.

“Since mid-March, our residents have dutifully complied with the ever-changing directives from Governor Newsom,” wrote Wagner.

“Our hospitals never reached capacity. We flattened the curve. We developed a safe reopening plan to which the governor promptly and punitively closed our beaches based on only a few misleading newspaper photos.”

Orange County was upgraded from the purple to the red tier in the state’s color-coded COVID-19 monitoring system on Sept. 8, allowing churches, movie theaters, and other businesses to resume limited indoor operations.

The Orange County Health Care Agency reported Sept. 18 that the county’s daily case count per 100,000 people fell from 5.2 last week to 4.7, and the seven-day rate of residents testing positive for COVID-19 dropped from 4.2 percent last week to 3.9 percent.

Follow Sarah on Twitter: @dadasarahle
Go Back: US News
Previous: Biden Says Ginsburg’s Successor Should Be Chosen by Election Winner
Next: Cruz, McSally Back Senate Vote to Confirm Replacement for Ginsburg, Democrats Push Back
source : www.theepochtimes.com
''