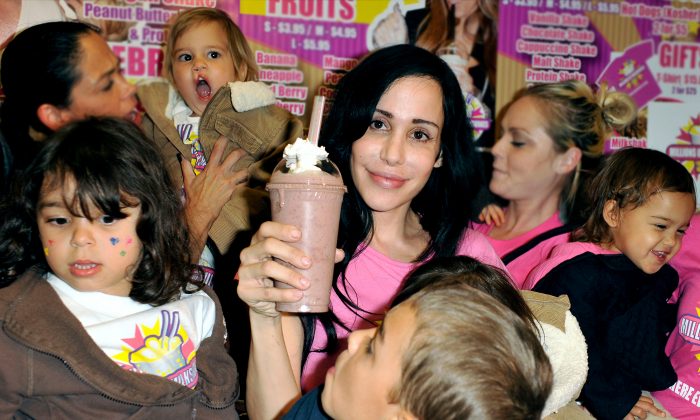 Originally criticized by the media for being an “irresponsible” single mom, Octomom, Natalie Suleman, is now ready to prove them wrong. In 2009, she became the most famous mother to give birth to octuplets, and all eight of them turned 10 this year.

The single mother of 14 kids—she has six older teens in addition to “the eight”—takes care of her brood in a small, three-bedroom townhouse outside of Los Angeles. Each 10-year-old performs their own job, dishes, laundry, and so on, in order to help Mom manage the house. There is just one kitchen table. They eat meals in shifts.

Wonderful reunion with my moms sister aunt Christine. We haven’t seen her since my moms passing two years ago and missed her dearly. Had an awesome discussion about veganism (she’s been a raw vegan for over 30 years and is 75!). We agreed it is possible her lifestyle saved her life as all the women in her family died from cancer! #Healthy #FamilyFirst #LoveMyFamily #IncludingPenelopeTheCat ❤️

After an IVF pregnancy and giving birth in 2009 via cesarean, Suleman made headlines, and a persona took shape. She tried to cash in on her new fame in order to make ends meet, which led to a short-lived adult film and stripping career when money ran out.

The “caricature” that began to shape Suleman’s life, created by the media she says, led her into a downward spiral. Suleman turned desperate. After forming a prescription drug addiction that could have killed her, she saw how her lifestyle was rubbing off on her kids in a bad way, and this led to her decision to “kill” Octomom for good.

She made history when she gave birth to octuplets ten years ago.

Now, 10 years on, Suleman finally feels like she can relax and be “herself.” She isn’t the monster, the circus sideshow, that she was made out to be.

Suleman works as a counselor for troubled women but also does “international photoshoots” to help make ends meet. In an interview with Inside Edition, Suleman admits that there is “financial hardship,” but that her children are her “greatest joy,” her “literal angels,” and that she can’t imagine life without them.

Life at home, meanwhile, could be summed up as something like “happy chaos.” Their day begins with a carpool in a beat-up Ford E-350 van that Suleman calls the “dump truck.” In the evenings, it’s chores and homework until bed, where space is so tight that some kids sleep on the couch. And on weekends, there are outings, TV, and vegan junkfood.

“The eight,” as the family call them, are currently in fourth grade. They are polite, they cook, read books, and do their homework without being asked, according to the New York Times. It looks like she’s proven everyone wrong. And judging by her eight, it looks like Mom is doing something right.

Had so much fun at the Reindeer Romp run! Thank you so much Janice for orchestrating all our races, the kids and I are so grateful to you! #ReindeerRomp #5k #FitFamily #Grateful