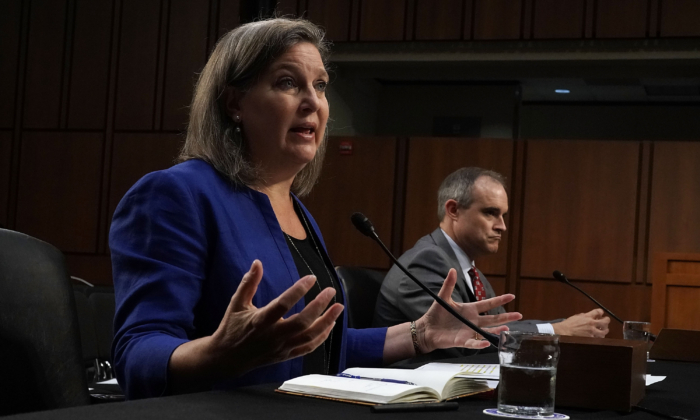 A senior State Department official involved in the events connected to the surveillance of the Trump 2016 presidential campaign was directly involved in concocting a plan in late 2015 to have Vice President Joe Biden force the firing of the top prosecutor in Ukraine by threatening to withhold $1 billion is U.S. loan guarantees, according to the impeachment inquiry testimony of George Kent, a senior State Department official.

State Department Assistant Secretary Victoria Nuland worked with U.S. Ambassador to Ukraine Geoffrey Pyatt in late 2015 to create a plan to force the firing of Ukrainian Prosecutor General Viktor Shokin, according to Kent. Nuland was also among a network of Obama administration officials involved in the distribution and recirculation of the infamous Steele dossier, the document which the FBI used to secure a maximally intrusive spy warrant to surveil a Trump-campaign associate.

“My understanding is that the conversations that were near-daily between Ambassador Pyatt and Toria Nuland regarding what to do on the way forward then included pitching the office of the Vice President to push President Poroshenko to remove Shokin,” Kent told lawmakers on Oct. 15.

Biden ultimately carried out Nuland’s plan during a visit to Ukraine in December 2015 and has since bragged, on at least two occasions, about forcing Shokin’s firing by threatening to cut off the loan guarantees. At the time Biden exerted pressure on Ukraine, Shokin was investigating Burisma, the Ukrainian gas giant which was paying Biden’s son, Hunter Biden, to serve on its board of directors. The Ukrainian president asked for Shokin’s resignation two months after Biden’s overture. The Ukrainian parliament approved the resignation on March 29, 2016.

Nuland’s involvement in the controversy about the Bidens’ dealings in Ukraine may raise new questions about the motivations of the officials involved in the circulation of the Steele dossier, the document which for three years fueled the debunked narrative that then-candidate Donald Trump colluded with Russia in 2016 to influence the 2016 presidential election. Christopher Steele, a former British intelligence officer, compiled the dossier by paying second- and third-hand sources with ties to the Kremlin. The Hillary Clinton campaign and the Democratic National Committee ultimately funded Steele’s work.

Nuland told CBS that she received a copy of the Steele dossier in July 2016 and forwarded it to the FBI. She has argued that she did right to forward the dossier to the bureau, but in doing so became one of many Obama administration officials who helped, wittingly or unwittingly, to launder Steele’s allegations by adding credibility to the unverified document in acting as a highly-placed conduit.

“He [Steele] passed two to four pages of short points of what he was finding, and our immediate reaction to that was, ‘This is not in our purview,'” Nuland told CBS. “‘This needs to go to the FBI, if there is any concern here that one candidate or the election as a whole might be influenced by the Russian federation. That’s something for the FBI to investigate.'”

Between Sept. 26 and Dec. 10 of 2016, Nuland received Russia-related information from Steele via State Department official Jonathan Winer, according to documents released as part of a Freedom of Information Act lawsuit by conservative watchdog Judicial Watch. During these three months, the FBI obtained the secret court warrant to surveil Trump campaign associate Carter Page. The Steele dossier served as the core of the evidence used in the Obama administration’s application for the warrant.

Nuland’s ties to Steele are not limited to 2016. Starting as early as June 2014, she received, via Winer, dozens of Steele’s reports on Russia and Ukraine, according to documents obtained by Judicial Watch. Notably, she forwarded three of Steele’s reports to Pyatt in November 2015, around the time the pair were hatching the plan to force Shokin’s firing.

According to his testimony, Kent was already aware that Hunter Biden was on Burisma’s board at the time Nuland and Pyatt planned to oust Shokin. Kent learned of Hunter Biden’s involvement in the company in early 2015 and became concerned about the appearance of a conflict of interest. In February 2015, Kent raised the issue with Biden’s office.

“The message that I recall hearing back was that the Vice President’s son Beau was dying of cancer and that there was no further bandwidth to deal with family related issues at that time,” Kent told lawmakers on Oct. 15.

Kent learned of Hunter Biden’s position with Burisma shortly after Kent pressed an official at the Ukrainian Prosecutor General’s office about the sudden closing in late December 2014 of an investigation into Burisma’s owner, Mykola Zlochevsky. Kent learned that an official at the office received a $7 million bribe in May 2014 to shutter the probe. Hunter Biden had joined Burisma’s board the month prior, in April 2014.

Kent clarified he did not witness any wrongdoing by U.S. officials.

“Let me be clear, however: I did not witness any effort by any US official to shield Burisma from scrutiny. In fact, I and other US officials consistently advocated re-instituting a scuttled investigation of Zlochevsky, Burisma’s founder, as well as holding the corrupt prosecutors who closed the case to account,” Kent said in his second testimony in the impeachment inquiry on Nov. 14.

The impeachment inquiry centers on Trump’s request for Ukrainian President Volodymyr Zelensky to work with U.S. prosecutors to investigate the Bidens. Democrats allege that the request was motivated by personal political interests. Republicans argue that Trump had valid concerns about whether the Bidens’ apparent conflict of interest was only an issue of perception. Notably, the vice president’s office was notified by Kent about the perception of a conflict of interest but did not take any action to remedy the concern.

Hunter Biden stepped down from the board of Burisma in April 2019.