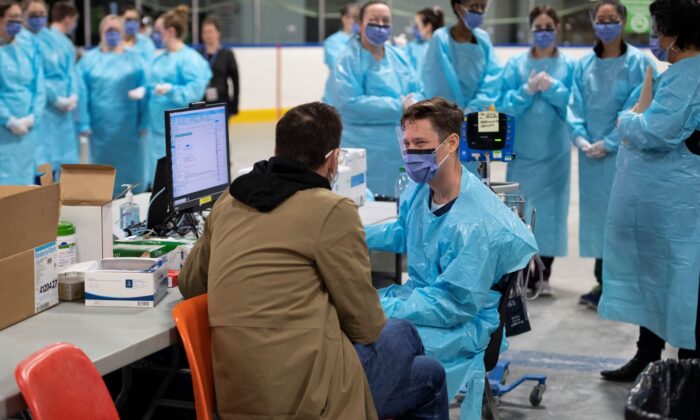 A health care worker speaks to a test patient at an assessment table as they prepare for the opening of the COVID-19 Assessment Centre at Brewer Park Arena in Ottawa on March 13, 2020. (The Canadian Press/Justin Tang)
Updated: 2020-03-25 18:31:02

A shortage of protective gear for frontline health-care workers, including gowns, gloves and surgical masks, is putting lives at risk in the midst of the COVID-19 pandemic threatening Canadians, says an Ontario physician.

“We would never put our soldiers on the front lines without the personal equipment, the protection that they needed, but that’s what we’re doing to our frontline doctors and nurses,” said Dr. Kulvinder Gill, president of Concerned Ontario Doctors and a longtime critic of inadequate hospital funding.

As shortages extended to virus-testing ability, Gill said authorities “started rationing testing. And they are only testing people … basically that have travel risk factors that are symptomatic.”

The number of completed COVID-19 tests on March 25 stood at 111, 297, leaving scores untested or tested too late, Gill told The Epoch Times.

“Two of the cases in Ontario that died of COVID-19—their test did not come up positive until after they died,” she said.

“As of yesterday, there were 31 health care workers in Ontario who tested positive for COVID-19,” she added. “And keep in mind, these numbers being reported are a grave underestimate of the true infection rates because of the shortage of nasal swabs to do the testing.”

Gill went on to say that some doctors are re-using items like masks and gowns, while others go without, increasing their risk of infection.

“And frontline doctors and nurses that are symptomatic, that have had contact with patients known to have COVID-19, are not being tested and told to just self-isolate,” she said.

To cope with the influx, some hospitals have begun cancelling elective surgeries to free up beds and medical staff.

On March 15, Prime Minister Justin Trudeau said the government’s $1 billion pandemic aid package will help ensure necessary equipment is available, and that a “careful accounting” of currently available supplies was being done.

“That is an ongoing challenge that we are addressing; we’re going to make sure that people have the support they need,” he said on CTV’s Question Period.

Policy makers have solicited Gill’s advice on Canada’s health care situation. Last May, she testified before MPs in Ottawa about violence faced by frontline health-care providers, and on Jan. 20 this year she warned Brampton City Council that its municipal hospital was under 24/7 “code gridlock.”

Code gridlock is when patient needs outstrip a facility’s ability to deliver care to the tune of 30 overflow beds, or “hallway healthcare.”

“In recent months code gridlock has escalated to such levels that we now have a new category called ‘extreme code gridlock,’” Gill told elected officials. “That’s when there’s more than 50 patients who have been admitted and are stuck in beds in ER because there’s nowhere else to go.”

Five days later, on Jan. 25, Canada’s first case of coronavirus was diagnosed at Toronto’s Sunnybrook Hospital—a man in his 50s who had just returned from Wuhan, China, ground zero for the outbreak. The next day, the man’s wife became the country’s second case.

As of March 25, there were 588 confirmed cases of COVID-19 in Ontario determined through nearly 22,400 tests; 126 of these cases are located in the Greater Toronto Area.

“Where I practice is the epicentre of Ontario’s and Canada’s health care crisis,” Gill said.

“Even before this pandemic started, we were already unequipped to be dealing with what was coming through the doors. And we still have flights arriving every single day from all the hot spots.”

According to the Organization for Economic Co-operation and Development (OECD), Canada falls well below the average number of hospital beds, ICU spaces, and even doctors.

Most recent OECD data indicates that the global average for Intensive Care Unit beds among nation states is 3.9/1000.

On Feb.9, barely a week after Canada’s first COVID-19 cases, Global Affairs announced that it was shipping 16 tons of personal protective equipment including clothing, face shields, masks, goggles, and gloves to China.

“And if you look at their procurement list, it only includes personal protective equipment. There’s nothing about medications, nothing about ventilators or nasal swabs,” Gill said.

“So not only did their procurement start months after we already knew about the outbreak in China, this government waited months, and even now its actions are falling short.”

'The Wuhan I Know': A Comic About The City Behind The Coronavirus Headlines

Shoppers In Mexico Are Panic-Buying Beer During The Coronavirus Crisis

What’s Being Done Around Canada to Fight the CCP Virus