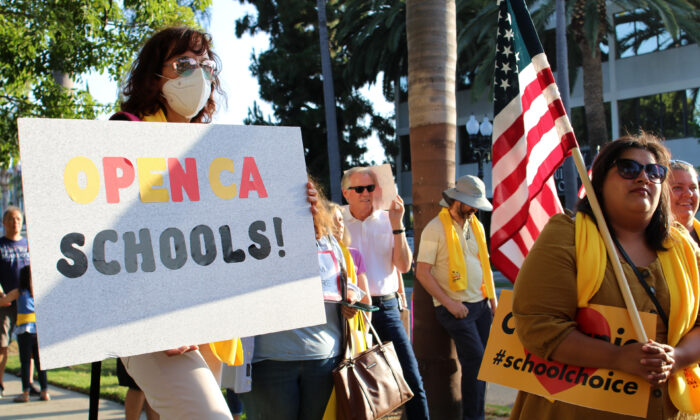 A growing number of California parents are urging local teachers’ unions and Gov. Gavin Newsom to reopen schools to in-person learning, frustrated by the state’s response to COVID-19.

Chants of “reopen the schools” drifted for blocks when nearly 75 members of an Orange County-based “Parent Union” assembled in front of their local teachers’ Santa Ana Educators Association building on Aug. 4, calling on Newsom to rescind his distance-learning mandate for counties that fail to meet state thresholds.

The energetic crowd sang The Star-Spangled Banner, and prayers permeated the atmosphere. Some parents waved American flags; others sported “Trump 2020” hats that could be seen from a distance. Their chants and cheers could be heard blocks away.

Orange county physician Dr. Jeff Barke stood in front of the crowd and led the protest, calling for schools to reopen. “There’s a lot of things that are risky [for children]—COVID-19 is not one of them,” he told The Epoch Times.

Barke is co-founder of a new charter school, the Orange County Classical Academy, which was slated to open Aug. 13—until Newsom announced July 17 that only schools in counties which remain off the state’s watch list for more than 14 days can return to in-person instruction.

Orange County remained on the watch list as of Aug. 6, with 38,711 total confirmed cases of COVID-19 and 697 deaths. The county’s case rate per 100,000 residents stood just shy of 98, higher than the state’s threshold of 25, while the rate of county residents testing positive for COVID-19 remained at the state’s desired 8 percent rate.

Many teachers in Orange County don’t want schools to reopen until the pandemic is under control, and teachers throughout the state have protested against returning to the classroom.

Barbara Pearson, president of the Santa Ana teachers’ union, called the protest in front of the union building a “desperate grab for attention.”

“It has nothing to do with the reopening of schools or the students of Santa Ana. Governor Newsom made the decision to close schools, not the unions. Our priority is the safety of staff and students,” Pearson wrote in an Aug. 4 email sent to the Orange County Register.

The California Department of Public Health (CDPH) announced Aug. 3 a process that allows certain elementary schools to qualify for waivers, permitting some to reopen for in-person education if they meet certain stringent conditions—but in accordance with Newsom’s guidance, counties can’t reopen schools if they’ve been on the state’s watch list within the last two weeks.

Cecilia Iglesias, a former Santa Ana councilwoman, founded the Parent Union as a way for community members to ensure better education for their children. She told The Epoch Times she thinks the closures are “very unfair”—especially for minority families.

“They’re essential workers, they’re out there working every day. Their kids are pretty much taking care of themselves,” Iglesias said.

Iglesias said parents should have the option to decide whether to send their children to school. “It’s important to give parents the choice, because I know many of the parents are saying that their kids are suffering, both emotionally and academically,” she said.

She suggested parents should receive money from the state if schools remain closed, so they can hire a teacher, tutor, or sitter.

Barke said some students may be going hungry because schools remain closed.

“Many of these kids in the lower socioeconomic class qualify for what’s known as free and reduced lunch. Many schools started serving breakfast as well,” Barke said.

“So some of these kids are getting fed in school, and now they’re home, and they’re not getting those meals that they’re used to getting.”

Board Members Join the Chorus

Some of the protesters were members of the Orange County Board of Education (OCBE), which cited the benefits of in-person learning in a July white paper that recommended a full return to schools without mandated social distancing or wearing face masks.

Barke has also been vocal about his beliefs on face masks and social distancing, calling them ineffective.

OCBE board member Mari Barke, wife of the protest’s leader, urged the crowd to keep fighting to reopen schools. “Parents are in the best position to make decisions for their children,” she said.

Board member Ken Williams also urged the crowd to continue “the fight for the children.”

The OCBE voted 4-0 at a July 28 meeting to file a lawsuit against Newsom and California Public Health Officer Dr. Sonia Y. Angell over the mandatory school closures.

“Many families will suffer greatly and experience many unknown, unintended consequences if schools remain closed. We believe students and their families must have the option for in-person learning,” Williams said at the meeting. “We have made the decision to put the needs of our students first.”

“Schools must … provide meaningful instruction during this pandemic whether they are physically open, the schools, or not,” Newsom said.

“Our students, our teachers, staff, and certainly parents, we all prefer in-classroom instruction for all the obvious reasons—social and emotional, foundationally—but only if it can be done safely.”