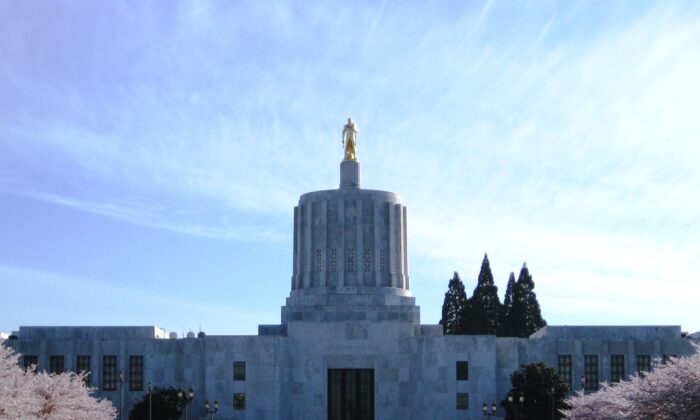 A 2019 memorandum submitted to Oregon Senate Committee on Human Services chairman Sen. Sarah Gelser warned the Oregon legislature that the state’s Department of Human Services (DHS) is putting foster children at risk by sending them to out-of-state residential treatment facilities operated by companies with a disturbing history of overseeing alleged physical and sexual abuse, including some cases of allegedly covering up assaults.

The memo, leaked to The Epoch Times, is entitled “Risks of harm to Oregon children in out-of-state placements” and was prepared at Sen. Gelser’s request by Ronald H. Davidson, PhD, who served twenty years as Director of the Mental Health Policy Program at the psychiatry department at the University of Illinois at Chicago.

Ten plaintiffs, represented by the organization A Better Childhood, filed a class-action lawsuit in April against the state, alleging that children were drugged and physically restrained or forced to bounce between unstable homes after being taken into Child Protective Services (CPS) custody.

Advocates say that children are routinely institutionalized or shipped out of the state of Oregon to dangerous foster care situations. Davidson’s report, submitted prior to Marilyn Jones’ resignation, makes it clear that children nationwide are at risk.

“While the list of recent and/or current out-of-state RTCs [Residential Treatment Centers] utilized by the Department of Human Services includes 86 DHS clients distributed across 21 facilities and 13 states, the ownership of these facilities includes only three corporations, each with performance histories that ought to be of concern to Oregon officials,” Davidson wrote, identifying three problematic companies: “Acadia Healthcare (10 clients) • Universal Health Services (2 clients) • Sequel Youth and Family Services (74 clients).”

“As shown in previous reviews conducted by federal and state healthcare investigators or law enforcement agencies, as well as in accounts by news media organizations, each of these national corporations have presented an array of troubling performance histories – often involving substandard quality of care, physical and sexual abuse, and ineffective or worthless treatment services. Moreover, in several well-documented cases, including reviews that were conducted on behalf of DCFS and the ACLU by my UIC program, investigators also found evidence of a pattern of unlawful activities or healthcare fraud,” Davidson wrote.

“Acadia Healthcare, based in Tennessee, is operated by the same corporate senior management team that formerly headed Psychiatric Solutions Inc. (PSI), which was acquired by UHS [Universal Health Services] in 2010…At Acadia, not only are there undisclosed criminal indictments and convictions of former employees for the death or assault of patients, but we found allegations that Acadia has:

The report delves into further detail on the problematic companies.

“DRO [Disability Rights Ohio] investigators also discovered a pattern of substandard quality of care at the Acadia-operated Ohio Hospital for Psychiatry, including sexual assaults, physical abuse and other harmful incidents and quality-deficit problems within the hospital,” Davidson wrote.

“Relevant DRO findings can be summarized in the following comments from their published report:  ‘Substantiated allegations of sexual and physical abuse • Failure to provide treatment in a trauma-informed setting for survivors of sexual abuse • Failure to request basic medical records and provide appropriate care, resulting in one case of a patient being placed on emergency life support • Using seclusion in an unsafe manner and outside of licensure requirements • Incomplete treatment and discharge plans, placing patients and the public at risk • Using hurtful, outdated and stigmatizing diagnostic language (e.g. retarded) in patient records.’”

“On March 7, 2019, the Chicago Tribune published a page-1 article on an Acadia RTC near Chicago—headlined ‘6 women sexually abused by counselor at women’s rehab center Timberline Knolls, prosecutors say’—which detailed a longstanding pattern of sexual assaults and abuse of patients at the facility, including reports by prosecutors that Acadia administrators actually delayed notifying law enforcement officials of these incidents for several weeks—and then only after Acadia officials learned that police already were investigating complaints by patients.  According to the Tribune: ‘A police detective asked a Timberline administrator why Timberline had waited at least the three weeks since July 16 to report [the employee’s] potential crimes. The administrator explained to police that administrators of individual Acadia facilities ‘have to contact corporate with these matters and corporate tells them to investigate and investigate more before they are allowed to call police,’ according to a police report released to the Tribune under open records laws.”

The Oregon report also examines PSI, which is now owned by UHS.

“Exhibit 91 is an internal PSI corporate document, written by the CEO of a Chicago psychiatric hospital that was then under review by my UIC team after children referred by DCFS were found to have suffered harm at the facility. Among the shocking allegations memorialized by the CEO in this account to her corporate-level manager, Exhibit 91 listed the following: • The CEO identified the hospital as ‘a façade peppered with deceit.’  • The hospital had ‘not reported allegations’ of harm to patients to DCFS or the police.  • Administrators ‘tampered with evidence on reported rape cases.’  • Video evidence of serious incidents were often ‘not being reported’ or shown to DCFS.  • ‘Poor quality’ of patient care existed ‘from top to bottom.’

“Moreover, the CEO charged that PSI’s corporate president—identified by name in this 2008 memo, and the same person who later started Acadia – was ‘infuriated’ by the news media coverage of violence and rapes, saying that he ‘refuses to see the problems,’ and indicating that he and other PSI corporate officials were deliberately ‘ignoring the risks.’

“It is worth noting that the defendants and their representatives in this case [a 2008 lawsuit in Illinois] ultimately chose to settle with plaintiffs for $100 million dollars, a sum that included $35 million dollars in legal fees, rather than risk going to trial in open federal court.”

“In fact, had they chosen that option, Exhibit 91 and other such evidence—which clearly indicated a reprehensible practice of knowingly placing vulnerable children in harm’s way in order to increase corporate profits—would then have become unsealed at trial, thereby revealing the sort of business model that likely could not withstand the glare of public scrutiny.”

“Stated bluntly, child welfare officials need to understand that there is a compelling body of evidence indicating that certain types of corporations simply cannot be relied upon to tell the truth, especially when adverse events occur in institutional settings where children have been entrusted to their care by agencies like Illinois’ DCFS or Oregon’s DHS,” Davidson wrote.

“Finally, as I noted in the attached 2018 memo on Acadia to the ACLU, two years before Exhibit 91 was written, Virginia moved to revoke the license of a PSI facility in Charlottesville after health officials found ‘multiple violations constituting neglect’ of children in care, including ‘sexual abuse by staff.’  The revocation letter cited ‘inadequate staffing’ as a direct cause of patient harm in a serious incident of violent assault (in which a young boy was beaten so badly that he reportedly stopped breathing temporarily and suffered a seizure),” Davidson wrote.

“Virginia investigators later concluded that “in spite of the concerns nursing staff voiced about the severity of his injuries, administrative staff directed nurses not to call emergency services. According to nursing staff, in a meeting held the day after the assault, [the PSI] administrators stated that they did not want 911 called because of concerns that the State might find out.”

“Universal Health Services, based in Pennsylvania, is the largest operator of private, for-profit, psychiatric hospitals in the United States. Additionally, the company operates a large number of behavioral health RTCs, including a facility where  the DHS list indicates two Oregon clients were placed: Provo Canyon School.”

“UHS was charged by the U.S. Department of Justice and the Attorney General of Virginia with healthcare fraud at one of its residential treatment centers, Keystone Academy. In that case, the government alleged a scheme that included poor quality of patient care, record falsification, and keeping youths unlawfully confined in the facility for extended lengths of stay in order to maximize financial profits.”

“Nor was this the only UHS facility where child welfare systems learned that their clients were receiving substandard or even dangerous care. In fact, I informed the Department of Justice about evidence of a similar pattern of harm to patients and record falsification that the UIC team uncovered during a 2011 review at a large UHS hospital in Chicago.”

“DOJ officials subsequently requested all of the data and patient records that my UIC team had gathered on UHS’s operations in Illinois, and we turned over 20 boxes of such evidence to the FBI in 2012. DOJ later opened a nationwide criminal investigation of UHS in Illinois and a dozen other states, and that probe is still ongoing,” Davidson wrote.

“Among the findings that the UIC team detailed in the reports to DCFS  and the ACLU about the UHS hospital in Chicago were:  • a consistent pattern of physical and sexual assaults on patients;  • inadequate staffing levels to ensure patient safety;  • poor quality of direct-care nursing staff training and supervision;  • falsification of medical records to conceal harm to patients;  • withholding information or lying to DCFS as part of the efforts to cover up or minimize adverse events at the hospital.”

“In its previous corporate incarnation, Sequel Youth & Family Services was known as Youth Services International (YSI), a for-profit company that specialized in residential programs for juvenile justice populations. Some of the YSI programs were located in Florida, Maryland, Nevada, Georgia and Texas – facilities where federal and state investigators later identified a pattern of physical and sexual abuse of youths who had been placed for treatment by juvenile justice and child welfare agencies around the U.S.,” Davidson wrote.

“Further, among the lawsuits brought against YSI officials, one in particular – D.M. vs. Youth Services International and JFS Holdings – a federal civil rights complaint alleging harm to youths in care, including sexual abuse by administrators and staff, is perhaps most instructive for any discussion of how state agencies have often failed to exercise effective due diligence when placing children in out-of-state settings that are not easily monitored for quality of care,” Davidson wrote.

“In fact, more recent news media reports about a Sequel-operated RTC in Utah    – Red Rock Canyon School, where DHS placed 28 clients – clearly suggest that Clarinda Academy is not the only Sequel facility where Oregon children may be at risk of harm…” Davidson wrote.

“Such was the case with the family of a 12-year-old rape victim sent to an earlier version of Red Rock, as detailed in a Utah federal court complaint: “Red Rock was dangerous and debauching. Defendants allowed other students to beat and berate [name of 12-year-old victim redacted], even to urinating on his clothing and effects. [The victim] begged his mother for freedom and his mother asked Defendants to release him. Defendants talked her out of it by promising to move him to a safer place.”

“Defendants moved [the victim] in with two much older boys who were adjudicated sex offenders, one of whom, [name redacted], that night raped [the victim] while Defendants slept. Defendants concealed the attack and covered it up while trying to talk [the victim] out of reporting it.”

“NOTE: Since the list of Oregon children in out-of-state placements indicates that DHS made one referral each to the Kingston and Norris facilities, it would seem reasonable to inquire whether Tennessee officials notified their Oregon counterparts of the emergency decisions regarding this Sequel program. The same question ought to be raised about whether Sequel officials notified Oregon DHS of Tennessee’s actions in this facility,” Davidson wrote.

The three companies in question did not provide comment for this report by press time, nor did Oregon DHS, nor did Sen. Gelser.

Follow Patrick on Twitter: @howleyreporter
Go Back: US News
Previous: Hillary stole Jimmy Kimmel’s bit — and all sides lambasted her for it
Next: Poll of six key swing states: 53% oppose removing Trump over his handling of Ukraine
source : www.theepochtimes.com
''

Pregnant Teen Who ‘Wanted a Baby so Bad’ Killed by Boyfriend: Police