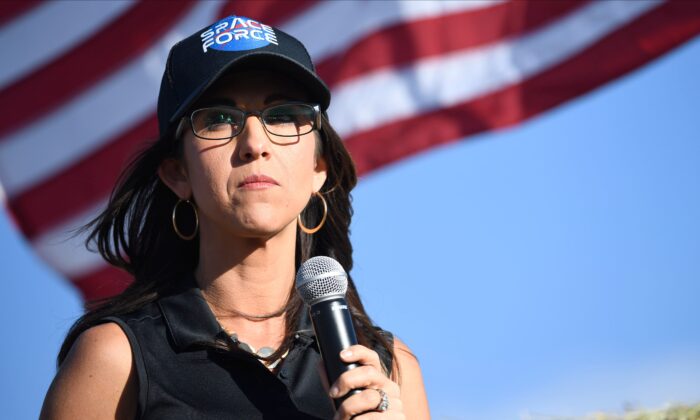 “This is a contested election. And I believe that President Trump should fight with everything that he has, and use all of the authority that he has, as the president of the United States, to make sure that we have a free and fair election,” Boebert told The Epoch Times’ “American Thought Leaders.”

While Democratic presidential nominee Joe Biden has declared victory in the election, the winner is unclear because results are being contested in a number of key battleground states like Georgia and Michigan.

Trump, his campaign, and others have filed a flurry of lawsuits challenging election procedures and rules, alleging fraud and pointing to irregularities like thousands of uncounted ballots being found in Georgia, and a county that initially said Biden won flipping some 6,000 votes from the Democrat to Trump.

“There’s there’s a very high percentage of the voters who came out for President Trump, who are questioning the outcome of this election,” said Boebert, who won the election for Colorado’s 3rd Congressional District after upsetting a Republican congressman in the primary.

In their first time presenting evidence of what they describe as election fraud to a judge, Trump campaign lawyers told a judge in Nevada this week that several batches of ballots were cast, processed, or counted illegally, including roughly 40,000 voters who allegedly voted twice. They also said signature verification on over 130,000 ballots was done solely by a machine, in contravention of Nevada’s election law.

Boebert pointed to surveillance footage from Atlanta’s State Farm Arena that was shown to lawmakers in Georgia during a public hearing on the election this week. The footage appeared to show workers pulling out boxes of ballots and scanning them after an absentee counting room was cleared of observers and press.

“That’s a lot of ballots that were counted there, and there was no oversight. And so we need to be getting to the bottom of this. We have video footage of this taking place. We have eyewitness testimony in so many states.”

Trump’s campaign and the Georgia Republican Party chairman on Friday filed an election contest in Georgia, charging that there were violations of the Constitution and state laws.

Georgia election officials committed “repeated violations of the election code” which “constituted an abandonment of the legislature’s duly enacted framework for conducting the election and for choosing presidential electors, contrary to Georgia law and the United States Constitution,” according to the suit.

Other lawsuits are ongoing.

“I think the American people deserve for these cases to be heard, and to be sent before judges,” Boebert told The Epoch Times.

“And if it needs to go to to the House, then I think that we have that authority,” she added, referring to the ability of Congress to challenge Electoral College votes.