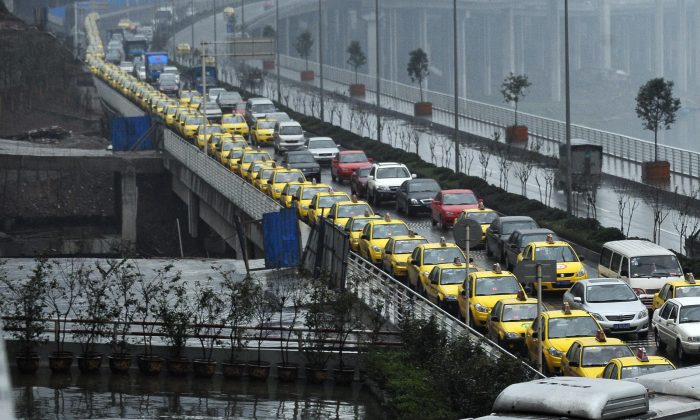 A woman was saved from jumping off a bridge by a concerned taxi driver who had dropped her off just moments prior to her suicide attempt, according to the Metropolis Report, a Chinese state-run TV news program.

Cellphone footage shows the woman attempting to leap off a bridge in Xinxiang City, Henan Province on May 5.

The woman, whose name was not given, was distraught over family problems. While Chinese people are generally much more reserved about showing their emotions, the driver, named Xiao Lizhong, felt that something was not right with the woman, according to the report.

Police later arrived at the scene to ensure the woman’s safety.

A Gut Feeling Saves a Life

When the woman got into Xiao’s taxi, she was already upset. A camera that was mounted on the dashboard shows her wiping tears from her face. She says something to Xiao, then he begins driving.

Not long after, she asks to get out of the car, and gives Xiao 70 yuan ($10), much more than what the actual fee would be for such a short trip. Before Xiao can give her the change, she gets out of the car and begins walking forward.

Xiao follows along behind her, telling her that he owes her 65 yuan ($9.50). But the woman didn’t seem to care. “This money is already useless to me,” she said, according to the Metropolis Report.

After hearing that, Xiao felt something was not right. So he continues to follow her in his car, but the woman ignores him as she kept walking. He catches up to her at an intersection at the entrance to a bridge, where a red light is holding traffic. Without hesitating, the woman walks through the red light, and Xiao follows after her before it turns green.

Xiao pulls up ahead of her once more and stops on the side of the road. Suddenly, the woman starts running at full speed and charges past the car. When she is just nearly out of view, Xiao starts driving.

When Xiao caught up to the woman, she was already half-way over the high guard-rails of the bridge.

“Hurry and save her! Pull her [up]!” a man can be heard yelling in the video. “Reach out, grab onto her!”

After the woman was pulled to safety, she squats down on the bridge. In the video, the slight sound of her crying can be heard through the whipping wind, as she stares at the ground. Passersby surround the woman and appear to comfort her, patting her on the shoulder.

Police later arrived to make sure the woman was safe, and then Xiao went on his way, according to the Metropolis Report.

Go Back: China News
Previous: No Easy Options for China as Trade War, US Pressure Bite
Next: Trump Expected to Sign Order Paving Way for US Telecoms Ban on Huawei
source : www.theepochtimes.com
''