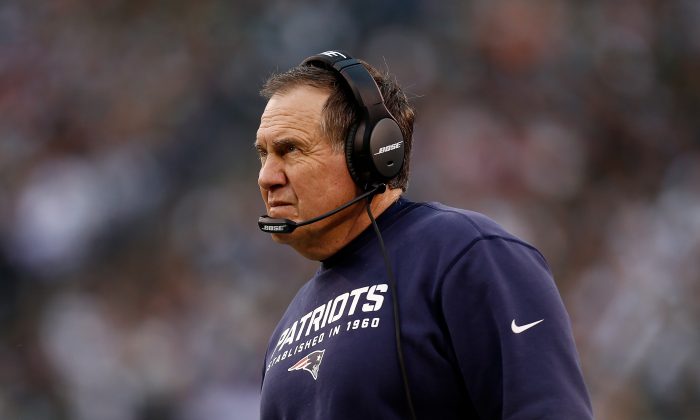 Bill Belichick has won four Super Bowls with the New England Patriots and can survive a gaffe like kicking the ball to start overtime. (Jeff Zelevansky/Getty Images)

The New England Patriots have denied allegations of spying after reports emerged that a member of a Patriots-linked film crew was filming the sideline of the Cincinnati Bengals, a team they’ll face on Sunday.

In a statement, the team acknowledged that their production crew inappropriately filmed the field and sideline as the Bengals played the Cleveland Browns. The Patriots played the Kansas City Chiefs on Sunday.

The film crew was credentialed by Cleveland to shoot footage for a Patriots web series, “Do Your Job,” but the Patriots didn’t tell Cincinnati or the NFL about it.

“While we sought and were granted credentialed access from the Cleveland Browns for the video crew, our failure to inform the Bengals and the League was an unintended oversight,” the team said. “In addition to filming the scout, the production crew—without specific knowledge of League rules—inappropriately filmed the field from the press box.”

“The sole purpose of the filming was to provide an illustration of an advance scout at work on the road,” the Patriots statement said. “There was no intention of using footage for any other purpose.”

The Patriots said the production crew includes independent contractors and is not part of New England’s football operations.

What’s more, according to the team, the crew “unknowingly violated” the NFL’s policy “by filming the field and sideline from the press box.”

“We accept full responsibility for the actions of our production crew at the Browns-Bengals game,” the statement said.

About a decade ago, the Patriots and coach Bill Belichick were fined hundreds of thousands of dollars for an incident later dubbed “Spygate” for illegally having film crews record an opponent. Belichick was fined $500,000—the largest doled out of a coach in NFL history—and the Patriots were fined $250,000, and the team also lost a first-round draft pick.

According to ESPN, the cameraman who shot the video for the Patriots asked security at the Browns-Bengals game if he could delete the footage and have the whole situation be forgotten. The NFL ended up confiscating his video.

A report from The Athletic said the Patriots video focused for about 8 minutes on the Bengals’ sideline and captured Cincinnati’s play calls, hand signals, and substitutions.

The situation gained national attention on Monday after Cincinnati coach Zac Taylor was asked about the incident. He said the NFL was investigating the situation, ESPN reported.

Belichick told WEEI on Monday that the team’s football operations doesn’t have anything to do with the “Do Your Job” team, adding that his advanced scouts know about the filming rules.

“They 100 percent know. All of our scouts, all of our video people and everything, they know what that is,” Belichick said, via ESPN. “Again, I have nothing to do with the TV production shows and stuff like that. I have no idea what they do. Or what their projects are and everything else.”

He added: “As I understand it, they were videotaping him, trying to show kind of what an advance scout does, or something Iike that, I don’t know. You’ll have to wait to see the show I guess and see how it’s presented.”