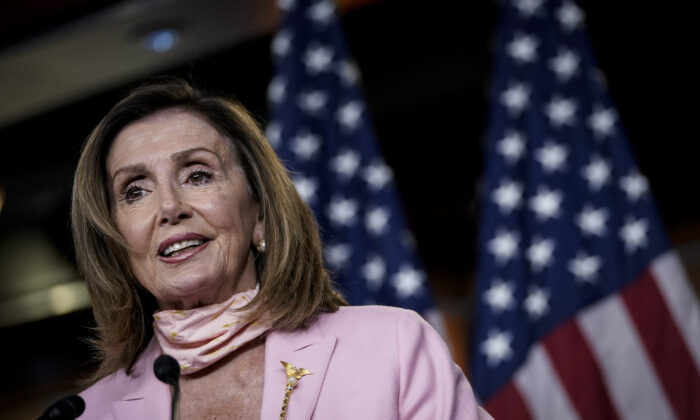 House Speaker Nancy Pelosi (D-Calif.) on Sunday said she believes a compromise must be made on extending direct payments to individuals as part of the next CCP virus legislation.

Under the $2.2 trillion CARES Act, which was passed by Congress and signed into law in March, Americans have been receiving an extra $600 in weekly unemployment payments amid the ongoing CCP (Chinese Communist Party) virus pandemic. The bill stipulates that the additional payments should expire on July 31, although in some states, the payments expire about a week before that.

During an interview on CNN’s “State of the Union,” Pelosi said she believes lawmakers can find common ground on extending jobless benefits and unemployment insurance for struggling Americans.

“We have to find a compromise because we must extend it,” Pelosi said on Sunday. “[It] will expire at the end of July and … people are desperately in need.”

The first round of stimulus payments was authorized as numerous governors implemented stay-at-home orders to curb the spread of the CCP virus and deemed some businesses nonessential, leading to more than 40 million job losses, according to Labor Department data.

“We’ll have to find common ground to pass legislation,” she added.

Just days earlier, Pelosi told reporters during a press briefing with public union members that she is “very confident” Democrats and Republicans in Congress will agree on strong new CCP virus relief legislation after lawmakers return on July 20 from their break.

White House economic adviser Larry Kudlow said Friday that the checks in the next round of payments would most likely be more focused. They would be smaller than the first, and would be “very carefully targeted” at Americans who are unemployed or in lower-income brackets, he said.

“That kind of economic assistance will probably be very carefully targeted,” Kudlow said at the White House. “It’s not going to be across the board.”

Although an income cap has not yet been established, Senate Majority Leader Mitch McConnell suggested Monday that individuals who earn less than $40,000 could be eligible to receive future stimulus payments. The figure currently stands at $75,000 under the CARES Act.

Kudlow said that it is of primary importance for the White House to help Americans get back to work.

“I think it’s going to be a tighter bill. We can’t keep posting $3, $4 trillion every three months or every two months,” he said.

Meanwhile, Democrats in the Senate have proposed extending the $600-per-week payments until jobless rates in individual states fell below 11 percent.

The Trump administration and lawmakers are expected to reengage in discussions in producing a bill for the president to sign after the Senate’s return later this month.

Jack Phillips and Reuters contributed to this report.

Go Back: US News
Previous: 18 Injured in Fire Aboard Ship at Naval Base San Diego
Next: Federal Officer Struck With Hammer During Portland Protests: Police
source : www.theepochtimes.com
''