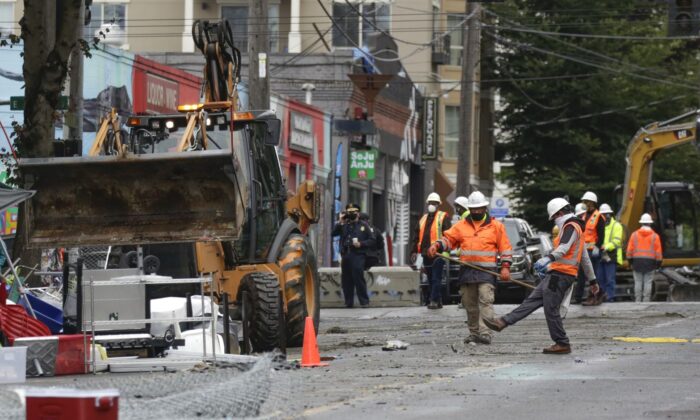 The police department wrote that individuals in a crowd of demonstrators were throwing bottles at officers.

“Officers deployed pepper spray and are making arrests,” the police department wrote in a statement on Thursday morning.

Seattle Police said that they will continue to make arrests to “ensure safety in the area,” according to another statement.

“Seattle Police have made 44 arrests for failure to disperse, assault, obstruction, pedestrian interference, and malicious mischief,” the department said, adding that pepper spray was deployed “during the arrest of an individual who was armed with a metal pole.”

“In a separate incident, an officer used a single less-lethal 40 mm sponge round on a man who appeared to be brandishing a metal pipe,” it said.

The move to disperse CHOP came after several shootings, which left two people dead in the area, as well as a spike in crime.

On Wednesday, city crews were seen with heavy machinery clearing concrete barriers, makeshift encampments, signs with graffiti, and other debris.

“I was just stunned by the amount of graffiti, garbage, and property destruction,” Seattle Police Chief Carmen Best was quoted saying by local news outlets as she toured the area.

Sanitation workers were also seen scrubbing the pavement and cleaning graffiti from buildings.

U.S. Attorney General William Barr commended Best in a statement for distinguishing between the right to protest and violent crime in “restoring the rule of law.” Barr did not mention Durkan, a Democrat who has been a target of Republican President Donald Trump’s ire.

Harry “Rick” Hearns, a protester who said he volunteered to provide armed security at CHOP for 24 straight days, told Reuters he supported the police crackdown “1,000 percent.” He blamed the violence on outsiders who he said had marred an otherwise successful monthlong occupation.

Go Back: US News
Previous: With Restrictions Eased, 4.8 Million Jobs Back in June
Next: Senators Want to Trade Columbus Day for Juneteenth
source : www.theepochtimes.com
''