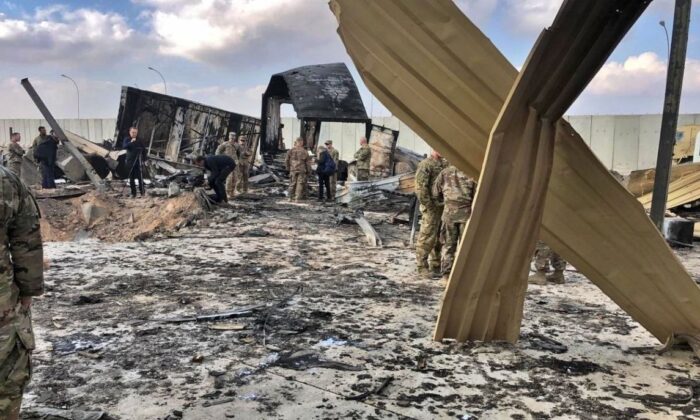 American troops in Iraq have revealed more details about the missile barrage from Iran last week as photographers captured workers trying to clean up the debris.

No American soldiers were killed or wounded, U.S. officials have said, but Col. Myles Caggins, a spokesman at the base, told The Associated Press that some troops were treated for concussions from the explosions.

“The reason why we pushed it at 2330 is because at that point in time all indications pointed to something coming,” she told reporters touring the base. “Worst case scenario—we were told was it’s probably going to be a missile attack. So we were informed of that.”

According to photos captured by the AP, several sections of the Al Asad base appeared to have been utterly devastated. The missiles destroyed several buildings that house soldiers, and a missile hit an area where six drones were parked. No damage to the drones was done, Caggins said.

The Iranian missiles began slamming into the airbase at around 1:30 a.m. local time, officials said. The base received a notification that the missiles were fired into Iraq due to early warning systems, which were touted by President Donald Trump in a speech the following day.

“We could feel the shock wave and when the impact hit, the bunker doors sunk in,” said Air Force Lt. Col. Staci Coleman, according to a report from the Wall Street Journal. “My personal opinion is that they really wanted to target our [air] assets and if they so happened to kill Americans in the process, that was OK with them.”

“After the first boom, I was confused and so I stuck my head out to see what it was,” said Capt. Jeffrey Hansen, reported the AP. “The second boom blew a bunch of debris on my face.”

American officers on the base told the newspaper that they had received information Iran was poised to attack for the killing of Iranian commander Qassem Soleimani on Jan. 3.

Lt. Col. Antoinette Chase told the news agency that soldiers conducted a drill a week prior to the Iranian attack. “I had zero casualties and everybody is alive to tell the tale. So as far as I’m concerned, I couldn’t be happier and I couldn’t be prouder of the actions that the soldiers and the coalition forces took that night,” she said.

Some Iranian officials said the missile attack wasn’t intended to kill anyone. But that claim was dismissed by those on base.

“You’re in a region that is full of conflict,” said First Sergeant Larry Jackson, according to the Journal, in disputing Iran’s claims.

Over the weekend, an Iranian Revolutionary Guards commander, Gen. Gen. Hossein Salami, said the missile strikes were “not really to kill enemy soldiers. That was not important.”

Rockets Hit Major US Air Base in Afghanistan

Expat In Post-Lockdown Wuhan: 'Things Will Never Be The Same'

Lies and deceit connect WHO with Beijing, President Trump wants to cut their funding

Australia Promises Aid to Coronavirus-Alert Pacific as Cyclone Tears Through