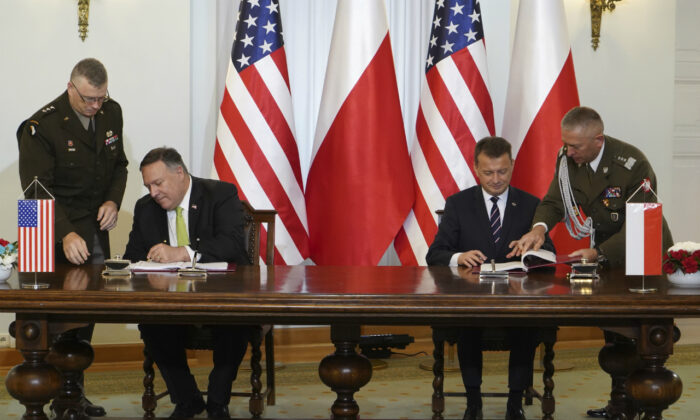 U.S. Secretary of State Mike Pompeo on Saturday signed a defense cooperation agreement with Polish officials that will pave the way for the redeployment of American troops from Germany to Poland.

In Warsaw at the end of a four-nation tour of central and eastern Europe, Pompeo and Polish Defense Minister Mariusz Błaszczak signed an Enhanced Defense Cooperation Agreement that sets out the legal framework for the additional troop presence.

The deal was concluded after months of negotiations with Poland following the two joint declarations President Donald Trump signed with Polish President Andrzej Duda last year, according to a White House statement.

The agreement is one in a series of actions to strengthen and rebuild the U.S. military, the White House said.

“This agreement serves as a model for other nations with respect to equitable burden-sharing,” the White House statement said.

Poland “has been a strong NATO Ally since its accession to the Alliance in 1999, and serves as a linchpin of regional security,” the U.S. State Department said in a statement.

“Poland is a crucial strategic U.S. Ally in Central Europe. Polish troops stand shoulder-to-shoulder with U.S. forces in Afghanistan and elsewhere, and provide critical support to the Defeat-ISIS Campaign” the statement said.

The pact supplements an existing NATO Status of Forces Agreement and regulates the legal status of U.S. forces in Poland. It provides necessary authorizations for activities conducted by the U.S. forces in Poland and their access to Polish military installations. It also sets out a formula for cost-sharing for the American military presence in Poland, the statement said.

The agreement needs to be ratified by Poland in order to be implemented, the U.S. State Department statement said.

Some 4,500 U.S. troops are currently based in Poland, but about 1,000 more are to be added. Last month, in line with Trump’s demand to reduce troop numbers in Germany, the Pentagon announced that 12,000 troops would be withdrawn from Germany with about 5,600 moving to other countries in Europe, including Poland.

In addition, the V Corps forward command post would be established in Poland and manned by 200 U.S. troops on a rotational basis. The first rotation will relocate to Poland next year.

“That’s an important strategic move for American security, too, as we have been having discussions with the Russians on our strategic dialogue,” Pompeo said in a joint press conference with Polish Foreign Minister Jacek Czaputowicz on Saturday.

“It will lead to good outcomes for each of our two countries, and the work that we all do as part of NATO as well,” Pompeo added.

“We agreed, together with my colleague, Secretary of State, that the presence of American troops in Poland enhances our deterrence potential because we are closer to the potential source of conflict,” Czaputowicz said at the press conference.

“It will be good to have also unreduced … American presence, in Germany. But we do understand the need for economy,” Czaputowicz said.

“The presence of American soldiers on the Polish soil contributes largely to the security of Poland and the Central European region,” he added.

After the signing ceremony, Pompeo joined Duda and other Polish leaders at the Tomb of the Unknown Soldier to mark the centennial of Poland’s landmark victory against the Russian Bolsheviks in 1920 during the Polish-Soviet war. The victory in the Battle of Warsaw stopped Bolsheviks from imposing communism on other parts of Europe.

“A hundred years ago this month, Polish valor won an epic victory against communist tyranny during the Battle of Warsaw, the Miracle on the Vistula. It’s one of the many heroic stands the Polish people have made in the 20th century,” Pompeo said in the press conference.