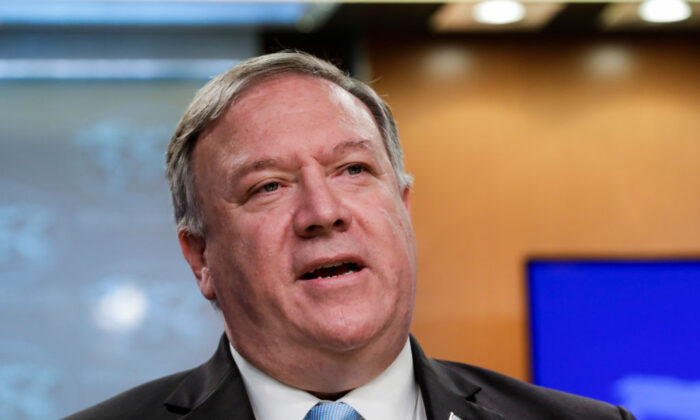 U.S. Secretary of State Mike Pompeo holds a joint news conference on the International Criminal Court at the State Department in Washington on June 11, 2020. (Yuri Gripas/AFP via Getty Images)
Updated: 2020-07-07 05:50:12

“I don’t want to get out in front of the President (Donald Trump), but it’s something we’re looking at,” Pompeo said in an interview with Fox News.

U.S. lawmakers have raised national security concerns over TikTok’s handling of user data, saying they were worried about Chinese laws requiring domestic companies “to support and cooperate with intelligence work controlled by the Chinese Communist Party.”

The app, which is not available in China, has sought to distance itself from its China-based owner ByteDance to appeal to a global audience and claims to be independent of the Chinese regime.

Pompeo’s remarks also come amid increasing U.S.-China tensions over the handling of the CCP virus, or coronavirus, outbreak, China’s actions in Hong Kong, and nearly two-years of difficult trade negotiations.

TikTok, a short-form video app, was recently banned in India along with 58 other Chinese apps after a border clash between India and China.

Reuters reported late on Monday that TikTok would exit the Hong Kong market within days, deciding to do so after China’s establishment of a sweeping new national security law for the semi-autonomous city.

Mystery Seeds From China Find Their Way to Labrador

Germany on ‘Front Line’ Against Chinese and Russian Influence: Report

China’s Most Valuable Listed Company Under Scrutiny for Corruption Ties

‘No One Left Alone’: Northern Chinese City on Edge as Virus Outbreak Spreads

Pompeo: Trump Will Take Action on Apps Linked to CCP ‘in Coming Days’