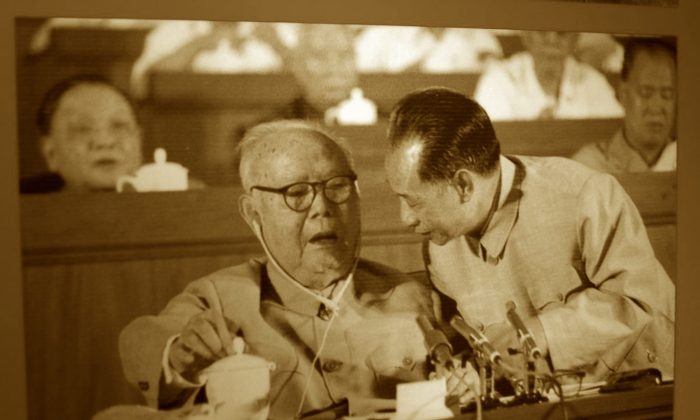 This photo taken on Nov. 2, 2012 shows the late disgraced Chinese leader Zhao Ziyang (R) talking to Ye Jianying, one of the founders of the Communist Party of China, with Hu Yaobang (back R) who also fell from power, and late patriarch Deng Xiaoping (back L), taken during the 12th party congress in 1982, on display at the press center for the upcoming Chinese Communist Party 18th Congress in Beijing. (Stéphane Lagarde/AFP/Getty Images)

Ye Xuanping, son of a founding Chinese Communist Party leader, died on Sept. 17 at the age of 95. The friendship between the Ye family and Chinese leader Xi’s family has spanned two generations, and the families have mutually supported each other in their political careers.

China’s princeling clan is a key component of the country’s complex power structure. A “princeling” refers to the child of a top Communist Party official. Oftentimes understanding the inter-family relationships is important for understanding China’s political affairs and power struggles.

Princelings can easily tap into their families’ political connections to make vast fortunes.

Ye Xuanping is the eldest son of Ye Jianying, one of the ten founding marshals of communist China. The younger Ye was the governor of Guangdong, the richest province in China, from 1985 to 1991. He subsequently served as vice-chairman of the Chinese People’s Political Consultative Conference, a political advisory body to the Chinese Communist Party (CCP), from 1991 to 2003.

Ye Jianying, who was almost as influential as Deng Xiaoping after Mao Zedong died in 1976, was one of the key figures in ending the Cultural Revolution (1966-1976) and made the decision to arrest Mao’s wife Jiang Qing and her cronies, referred to as the “Gang of Four” in China.

Ye also made arrangements for Xi Jinping to take a position in the CCP’s military committee when Xi graduated from Tsinghua University with a degree in Organic Chemistry in 1979.

Xi’s experience in the military committee was a pivotal cornerstone in his political career, as it was a major consideration when the Party elders chose him as the President of China.

A June 26 article from RFA stated that, after almost all Party elders either passed away or completely exited the political arena, the Ye family became the most influential princeling family in China.

Ye Jianying’s second son, Ye Xuanning, gave Xi Jinping strong support by playing a key role in taking down Bo Xilai, which was a crucial step for Xi in removing all obstacles in his path to becoming China’s leader. In addition, the Ye family made several public announcements backing Xi when the struggles between Xi and Jiang Zemin’s faction became intense, according to the article.

Ye Xuanning passed away in 2016, and received the highest grade funeral service among China’s Princelings.

Ye Jianying’s eldest daughter Ye Chumei is also a former CCP high-ranking official, but her position is not as prominent as those of her two brothers. Ye Jianying’s other children and grandchildren are active in the business circles.