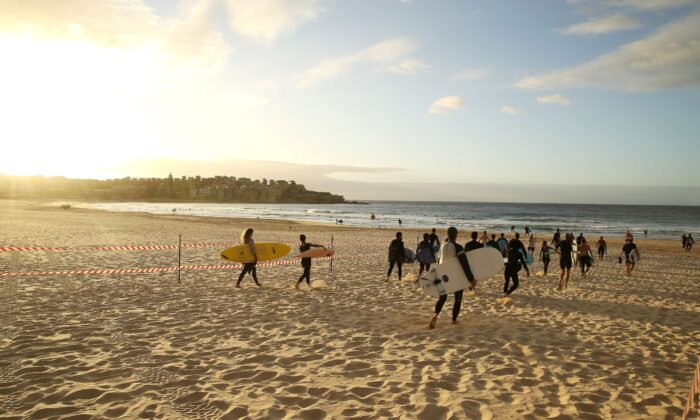 While many countries remain in COVID-19 pandemic lockdown or are just slowly starting to ease restrictions, Australia began opening up public beaches and relaxing rules in late April and has continued staying ahead of the curve in its efforts to protect its citizens’ lives.

As of May 24, with a population of 25.7 million, Australia has seen approximately 7,110 cases of infection and 102 deaths as a result of the CCP (Chinese Communist Party) virus.

By early April, Financial Times journalist John Burn-Murdoch had already taken note: “Australia a rare example of an Anglophone country on a gentle trajectory,” he wrote in a tweet.

Now that more businesses are reopening and more internal travel bans are being lifted, some sense of normalcy is gradually returning.

While no one knows when and how the pandemic will end, it’s important to reflect on how a country like Australia managed to beat the odds and what it can do to stay the course as it tackles the complex challenges ahead across all sectors of society.

In this regard, much of Canberra’s success appears to stem from its vigilance and determined action when it comes to the Chinese communist regime.

A key move that helped Australia contain the spread of the virus was closing the border to visitors from China on Feb. 1—despite Beijing’s protestations and against World Health Organization (WHO) advice.

This was “the right decision” and “one of the most important decisions made by an Australian government in decades,” Health Minister Greg Hunt recently told Sky News.

Shortly thereafter, the Chinese regime’s hoarding of personal protective equipment in January and February, such as masks, gloves, gowns, and hand sanitizer, led to shortages worldwide. Australia was no exception. As The Epoch Times previously reported, the regime had directed its United Front Work Department to mobilize overseas pro-Beijing groups to buy large quantities of these vital medical supplies and ship them to China.

Canberra promptly announced a ban on the non-commercial export of these supplies, stipulating fines and jail terms for violating the ban.

Meanwhile, global concerns arose over foreign takeovers of distressed companies amid the pandemic, especially by authoritarian states like Beijing, that could undermine supply chains and countries’ national security.

In response, on March 29, Australia’s Treasurer Josh Frydenberg announced changes to the country’s foreign investment review policy, requiring every proposed foreign takeover to be reviewed regardless of value.

This was to avoid “predatory behaviour that is not in the national interest” and would be effective for “the duration of the current crisis,” he said.

Then in mid-April, Australian Foreign Minister Marise Payne called for an independent review into the pandemic’s origins including Beijing’s handling of the initial outbreak in Wuhan. She quickly received backing from shadow foreign minister Penny Wong followed by support from Prime Minister Scott Morrison and others.

The Chinese regime tried to discredit the request by accusing Canberra of politicizing the pandemic and warning that Chinese citizens may boycott Australia in various areas including beef, wine, tourism, and international students.

When Canberra refused to back down, Beijing banned beef imports from four major Australian producers and imposed 80 percent tariffs on Australian barley.

Despite Beijing’s disinformation and economic coercion, Canberra remained firm, winning support from over 120 countries for a co-sponsored motion seeking an independent evaluation of the global response to COVID-19 including the source of the virus and its route of transmission to humans. The WHO passed the motion at a virtual assembly on May 19.

Australia’s vigilant response to the CCP during the pandemic is consistent with Canberra’s actions in recent years that clearly show its growing awareness of the urgency and necessity of resisting the threats posed by the communist regime.

These threats are not limited to health and economic consequences but also include significant political interference and espionage activities.

In 2016, Prime Minister Malcolm Turnbull commissioned a report on the extent of foreign interference in Australia. The classified report, which was leaked to the media in 2018, found that the CCP had over the past decade been making attempts to influence Australian political parties and policy-making at every level of government.

In response, Turnbull’s government introduced legislation that banned foreign donations to political candidates, broadened the definition of espionage activities, and required all those working on behalf of foreign entities to publicly declare who they are working for.

Australia was also one of the first countries to ban Huawei from its 5G networks on national security grounds. In 2018, Canberra blocked Huawei from providing 5G technology to Australia, while barring ZTE, another Chinese tech company, at the same time.

“The fundamental issue is one of trust between nations in cyberspace,” wrote Simeon Gilding, a senior fellow at the Australian Strategic Policy Institute (ASPI), in a commentary in January.

“Over the past decade, the Chinese Communist Party has destroyed that trust through its scaled and indiscriminate hacking of foreign networks and its determination to direct and control Chinese tech companies,” added Gilding, who until December 2019 was head of the Australian Signals Directorate’s signals intelligence and offensive cyber missions.

Due to concerns about cyber attacks originating from China, Australia had already excluded Huawei from bidding on a project to build out the country’s national broadband network back in 2012.

Canberra’s vigilance combined with informed and timely action against the CCP could well be the most significant factor contributing to Australia’s much-better-than-expected pandemic outcome thus far. It also attests to the kind of sound China policy and direction that will likely continue to serve the country well in the critical times ahead.

In this context, there is bipartisan backing and broad public support for Canberra’s decisions including its Huawei ban and its leadership in pushing for a global inquiry into the pandemic. And Beijing’s overt use of coercion and disinformation has damaged its own image and helped to alert Australians to the serious threat that it poses.

“Managing relations with an assertive China requires Australian patience, consistency and steadfastness on policy over the long term,” wrote Richard Maude, executive director of policy at the Asia Society Australia, in an article in May. Maude is also a former Australian deputy secretary of foreign affairs and trade.

“The task is harder because China increasingly is conducting its diplomacy in a manner it would never accept from others. That diminishes China but is the nature of authoritarian power.”

Vicky Xiuzhong Xu, an analyst at the ASPI, wrote in an opinion piece that “Australia must not bow to China but seek wider trade options” and “look to our real friends.”

In her article, published by the Sydney Morning Herald on May 21, Xu advised forming a strong alliance with like-minded nations and thinking long-term in reducing reliance on China to better allow Australia to overcome Beijing’s tactics.

A survey conducted in the third week of May shows that 79 percent of Australians believe the country is responding to the pandemic at an appropriate level and that 67 percent believe the government is doing a “good” or “excellent” job. Despite concerns about the economy and jobs, “Australians continue to have strong faith in the performance and actions of government,” the survey found.

Australia’s prime minister in turn has strong faith in his spiritual belief. In a video published in March on the Eternity News website, Morrison says a prayer for his country and people as well as his government colleagues.

He prayed for God to “give us strength in this country, give us wisdom, give us judgment, give us encouragement, and let your peace reign.”

Morrison has also declared that Australia would never “trade away our values” and would deal with other countries “fairly and honestly and openly,” reported The Guardian in May.

“We have always been independent … and we will always stand our ground when it comes to the things that we believe in and the values that we uphold,” he said.

North Korea Rejects Talks as US Envoy Arrives in Seoul

Irish Housebuilding to Fall by One-Third Due to Covid-19: Central Bank

Conservative MPs Call For Emergency Meeting Over WE Charity Scandal

Opinion: Companies Have A Duty To Defend Democracy