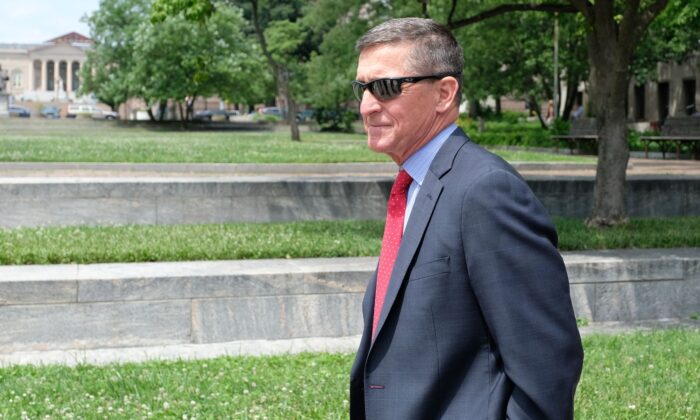 Prosecutors handling the case of Lt. Gen. Michael Flynn have laid out their opposition to his request for the court to dismiss the case.

In a Feb. 12 court filing, they argued that the government misconduct Flynn alleges either doesn’t exist or is not related to Flynn’s offense (pdf).

Flynn, former national security adviser to President Donald Trump and former head of military intelligence during the Obama administration, pleaded guilty on Dec. 1, 2017, to one count of lying to FBI agents during a Jan. 24, 2017, interview.

On Jan. 14, Flynn asked District Judge Emmet Sullivan to allow him to withdraw his guilty plea. In a Jan. 29 declaration, he proclaimed his innocence and the intent to fight to restore his reputation.

On Jan. 29, Flynn also asked the court to dismiss the case. His lawyers, led by former prosecutor Sidney Powell, pointed to FBI misconduct revealed in a Dec. 9 report by the Justice Department’s Office of Inspector General (OIG). They also raised irregularities in how the FBI report from the Flynn interview was produced, the leverage the prosecutors used to get Flynn to plead guilty, and the prosecutors’ withholding, for more than a year, documents that the defense deems exculpatory.

“Mr. Flynn was framed and setup by his own government in a shockingly inappropriate and wrongful conduct by the ‘leadership’ of the FBI, DOJ, and ‘intelligence officials,’” Powell said in the court filing.

The OIG report details how the FBI, in a counterintelligence investigation dubbed Crossfire Hurricane, withheld multiple pieces of evidence from the secret Foreign Intelligence Surveillance Court (FISC) and was thus able to obtain four surveillance warrants, three of which were renewals, to spy on former Trump 2016 campaign aide Carter Page. Two of the warrants have since been declared invalid and illegal by the Justice Department (DOJ).

Flynn was among a number of targets in Crossfire Hurricane, which probed alleged collusion between the Trump campaign and Russia to sway the 2016 election. The investigation, taken over in mid 2017 by a special counsel, former FBI head Robert Mueller, was unable to establish any collusion.

The same top-level agent responsible for the Page warrants, Peter Strzok, then-deputy assistant director for counterintelligence operations, and Supervisory Special Agent Joe Pientka, were the ones who interviewed Flynn.

The prosecutors of the Flynn case say that the OIG findings “are potentially impeaching” of Pientka—showing him as an unreliable witness—but not exculpatory since his fault regarding the Page warrants is unrelated to his interviewing Flynn. The Supreme Court ruled in 2001 that defendants don’t have a right to impeaching information before they plead guilty (pdf).

The prosecutors didn’t respond to the argument regarding Strzok.

Powell also pointed to the fact that the FBI sent Pientka in 2016 to a strategic intelligence briefing to the Trump campaign to snoop on Flynn. Powell called it an “intolerable breach of trust and deceitful conduct.”

The prosecutors pointed out the OIG found this was not misconduct on Pientka’s part.

The OIG, however, raised the issue as a matter of serious concern. Using a strategic intelligence briefing to snoop on a former head of military intelligence and presidential campaign adviser is likely an unprecedented move for the bureau.

As the prosecutors note, “The OIG recommended developing policy or guidance to address such briefings in the future.”

The prosecutors also noted that the OIG “concluded that the FBI had sufficient predication to open [a] full counterintelligence investigation” of Flynn.

This issue, however, is still being investigated by U.S. Attorney John Durham, who already signaled he has more to say on the topic.

“We advised the Inspector General that we do not agree with some of the report’s conclusions as to predication and how the FBI case was opened,” Durham responded to the OIG report in a rare statement.

Powell also criticized the fact that it took the FBI agents about three weeks to complete a report from the Flynn interview—the FBI form FD-302—while the FBI rules say it needs to be done within five days. Moreover, the first draft of the 302 provided to the defense was from Feb. 10, 2017—more than two weeks after the interview. Powell previously said she found a witness who saw an earlier draft of the 302 stating that Flynn was honest with the FBI. She alleges the draft was either destroyed or is being suppressed by the government.

The prosecutors have not addressed the allegation and have focused on the judges previous ruling that “there were no material changes” between the 302 drafts and the final 302 the defense was provided.

Powell has also argued that the DOJ rushed Flynn to file foreign lobbying paperwork for his defunct consultancy, Flynn Intel Group (FIG), in 2017 and then threatened to prosecute him for lying on the forms even though they were “substantially correct in all material respects.”

The prosecutors have argued that Flynn lied on the forms because he failed to tell his previous lawyers who prepared the papers about communications Turkish officials had with a Turkish businessman Kamil Ekim Alptekin regarding a job FIG did for Alptekin’s firm in 2016.

Powell said Flynn didn’t lie to the lawyers and depended on them to do the paperwork properly. She pointed out that it was not until December that the prosecutors handed over a pile of documents, including reports from 2018 FBI interviews with Flynn’s former lawyers, that revealed the main prosecutor, Brandon Van Grack, knew the threatened lobbying paperwork charges against Flynn “were bogus,” Powell said.

The prosecutors say the interview reports were not helpful to the defense and, regardless, they provided them in time since Flynn hasn’t been sentenced yet.

They portrayed the lobbying paperwork as unrelated to Flynn’s plea, since he only pleaded to lying to the FBI and not on the papers.

Powell previously pointed out the main reason for the plea was the threat of a charge over the paperwork since Flynn’s son worked for FIG too and the prosecutors worked out an under-the-table deal with Flynn to leave his son alone if he agreed to the plea.

Follow Petr on Twitter: @petrsvab
Go Back: US News
Previous: Texas man wanted for scamming elderly Vietnam vet out of $17,000 for roof repairs
Next: Barr Says Trump’s Comments About DOJ Cases Make It ‘Impossible to Do My Job’
source : www.theepochtimes.com
''