Remember Jennifer Lopez’s Gown That Made Her Look Like ‘Interstellar Cinderella’? 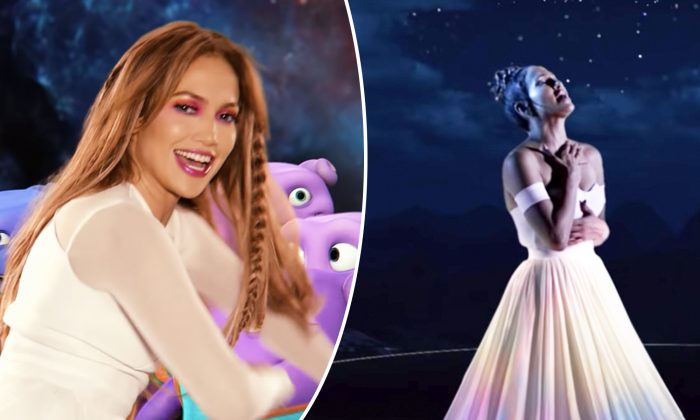 Today, we’re having flashbacks. They involve Jennifer Lopez and a mind-blowing gown that reflected the universe. Won’t you join us in paying homage to this magical moment from the archives of American Idol?

Under stage lights on the evening of March 19, 2015, Lopez well and truly proved her talent to the show’s judging panel. The then-45-year-old singer entranced her fellow judges and the audience with her beautiful song “Feel the Light,” which was originally recorded for the animated movie Home, released the same year. Lopez also voiced Lucy, one of the movie’s main characters.

“It’s about feeling the light and finding your way back to each other,” Lopez shared fondly in behind-the-scenes footage of the music video’s production. The mom of two clearly put her heart and soul into every performance of this beautiful song.

But while Lopez’s American Idol performance was outstanding, what truly caused jaws to drop was her unbelievable 40-foot-across gown that completely filled the stage. Designed and made by styling duo Rob Zangardi and Mariel Haenn, the dress was allegedly designed in only two days. “The look was inspired from an old vintage reference that we’ve been holding on to for a long time, waiting for the right moment,” Zangardi revealed to The Hollywood Reporter.

Remember when Jennifer sang "Feel The Light" and looked like an Interstella' Cinderella? Of course you do! Relive that and all your favorite Idol moments here: http://idol.ly/SeasonXIV

He also revealed that the gown was “actually a dress with a 20-foot-radius skirt attached to it.” Comprising two separate pieces, a beautiful dress by Misha gave Lopez her elegant top-half silhouette, before the incredible, voluminous skirt was placed and sewn over the top.

If you’re wondering whether Lopez enjoyed wearing the dress, Haenn had the answer. Perhaps she was reticent at first? “It wasn’t until she stepped in and we took her picture in it,” Haenn revealed, “and showed her how she looked in it, that we got the ‘wow’ reaction!” The gown was the perfect marriage of elegance and innovation, but the designers were careful to ensure it was “simple enough to allow the animation and projection to be as functional as possible,” Haenn added.

That dress had us alllll talking, but now it's Jennifer's turn to talk! Find out why her "Feel The Light" performance was so special to her.

And boy, did it have the desired effect!

The intricate, cosmic projections were carefully mapped out ahead of time to make sure the performance had a “wow factor” as big as the dress, but this threw a spanner in the works for Lopez; the usually active performer had to stand completely still. It couldn’t have been easy to sing such an emotional song and not move a muscle, but Lopez is a pro. She nailed it.

As Lopez sang, impressive special effects and images from the animated film were projected onto the vast expanse of the dress’s fabric. The singer became one with the stage. As if that wasn’t impressive enough, keen-eyed viewers will also have noticed that Lopez’s microphone was drenched in crystals. The magic is in the details.

“All of it just worked so beautifully together,” Lopez shared backstage at American Idol. “It was a special moment for me, something I’ve wanted to do for a long time.”

As per the song’s sweet lyrics, “I still remember when time was frozen,” ET Online speculated whether this could have been a clever reference to another of Disney’s blockbusting animated movies, Frozen. “Feel the Light” is pure magic whichever way you look at it. We hope that Lopez’s (inter)stellar performance and the cosmic mastery of her dress continue to inspire for a long, long time.