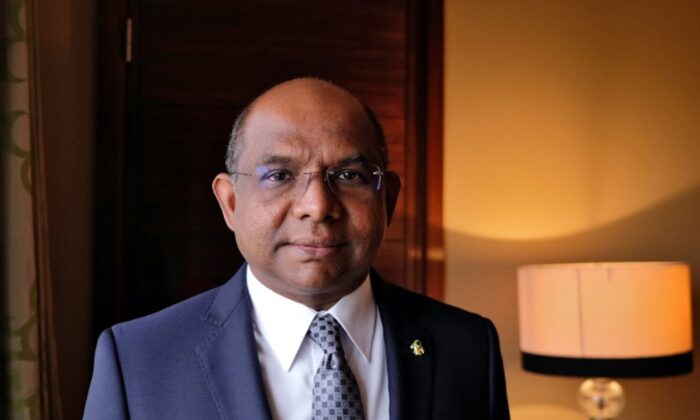 NEW DELHI—A report on alleged Chinese corruption in the Maldives will be completed by June, the Maldives’ Foreign Minister Abdulla Shahid said on Jan. 16, as the current government investigates a surge of investments by China in recent years.

The tropical archipelago grew closer to Beijing under the rule of former president, Abdulla Yameen, with China funding an airport, bridge and social housing as part of its “One Belt, One Road” (OBOR, also known as Belt and Road) initiative.

Critics of Yameen, who was voted out in 2018 after five years in office, say government contracts were awarded at inflated prices, and that the spending threatened to sink the islands’ tiny economy.

Incumbent President Ibrahim Mohamed Solih announced a commission in November 2018 to look into deals made during Yameen’s rule. It will reveal its findings in the first half of this year, Shahid told Reuters during an interview in New Delhi.

“In Beijing, I found a willingness to engage with the current government,” Shahid said regarding the deals made by Yameen. “The irresponsible borrowing of the previous government is being looked at.”

The Maldives is now attempting to balance its relations with traditional ally India as well as China, which holds huge influence in the island nation.

Mohamed Nasheed, president of Solih’s ruling Maldivian Democratic Party and a former leader of the country, told Reuters in November 2018 that the Maldives would pull out of what he termed a one-sided free trade agreement between Male and Beijing.

But Shahid said on Thursday the government may now not be able to back out of the deal.

“We have very clearly said as members of parliament, that the process was flawed,” Shahid said. “It is a thousand-page document and the process (of the free-trade deal passing through parliament) took something like five minutes.”

“But now we are in government, and we also have to honor the sovereign decision of a government that has taken place, but it would be unfair for us to decide without examining the contents of the agreement.”

China has consistently said its projects in the Maldives are aimed at developing its economy, and that contracts were awarded fairly.

Yameen, who was convicted and sentenced to five years in prison for money laundering in November, denies corruption in his deals with China.

The Maldives, a string of palm-fringed islands and atolls lying 325 miles southwest of the southern tip of India, is best known as a luxury holiday destination.

During a five-year construction boom in the Maldives, China built a sea bridge connecting the capital, Male, to the main airport and is developing the airport itself, as well as building housing on land reclaimed from the sea.

The Chinese investment in Maldives is seen as part of its “String of Pearls” strategy, developing a network of friendly ports in the region from Sri Lanka to Pakistan.

The Maldives’ finance minister has said that of the country’s total $3.7 billion debt, $1.4 billion is owed to China, mostly for funding OBOR projects.

India and Western nations have worried that the strategy ultimately aims to help China‘s military extend its reach.

By Alasdair Pal and Devjyot Ghoshal. The Epoch Times contributed to this report.