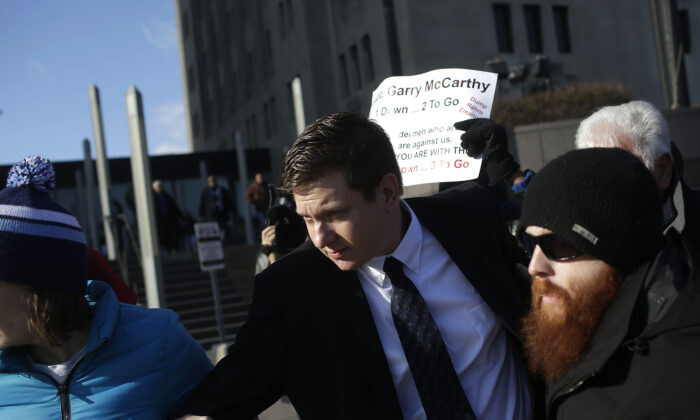 Former Chicago police officer Jason Van Dyke, center, who was charged with murder in the shooting of Laquan McDonald, leaves the Cook County Criminal Court after his status hearing in Chicago, Illinois on Dec. 18, 2015. Van Dyke was convicted of murder and sentenced to 81 months in prison. (Joshua Lott/Getty Images)
Updated: 2020-07-10 23:45:19

Researchers who published a widely cited paper on fatal police shootings last year said they’ve requested a retraction because the paper is being used improperly.

Michigan State University researchers found “no evidence of anti-Black or anti-Hispanic disparities across shootings, and White officers are not more likely to shoot minority civilians than non-White officers,” they wrote in the research article, published in the Proceedings of the National Academy of Sciences of the United States of America (PNAS).

Two of the researchers, David Johnson and Joseph Cesario, submitted a request this week to PNAS for a retraction of the paper.

The psychology professors said they were careless when describing inferences that could be made from the data in the paper, which looked at fatal police-involved shootings in 2015.

“This led to the misuse of our article to support the position that the probablity of being shot by police did not differ between Black and White Americans,” they wrote.

“To be clear, our work does not speak to this issue and should not be used to support such statements.”

The authors already issued one correction and said they don’t want to publish anymore, leading to the retraction request.

“We take full responsibility for not being careful enough with the inferences made in our article, as this directly led to the misunderstanding of our research,” Cesario and Johnson said.

The decision “had nothing to do with political considerations, ‘mob’ pressure, threats to the authors, or distaste for the political views of people citing the work approvingly,” they added.

An earlier version (pdf) of the retraction request named only one person who the researchers said was misusing the paper: Heather Mac Donald, a fellow at the Manhattan Institute.

Mac Donald said in an op-ed that the researchers were “disowning their research simply because I cited it.”

“The authors don’t say how I misused their work. Instead, they attribute to me a position I have never taken: that the ‘probability of being shot by police did not differ between Black and White Americans.’ To the contrary, I have, like them, stressed that racial disparities in policing reflect differences in violent crime rates,” she wrote.

“The only thing wrong with their article, and my citation of it, is that its conclusion is unacceptable in our current political climate.”

Asked why he and Cesario removed Mac Donald’s name from their updated retraction request, Johnson declined to answer directly. He told The Epoch Times via email that the new statement “clarifies why my coauthors and I decided to retract the paper.”

A spokesperson for PNAS said that it received the request for retraction.

“We are working to publish the statement as quickly as possible,” the spokesperson said in an emailed statement. As of July 9, the statement is not published on the journal’s website.

An editorial published by PNAS last month noted Mac Donald’s citing of the paper in an op-ed and in testimony to Congress.

A “glaring mistake” was missed during peer review, the editorial, which appears to be from two people who peer reviewed the article, states. A statement about the article from the officers “erroneously asserted that ‘white officers are not more likely to shoot minority civilians than nonwhite officers,'” Douglas Massey of Princeton University and Mary Waters of Harvard University wrote.

“Unfortunately, their article did not contain the data to address this question, and their analyses did not allow them to conclude this.”

Follow Zachary on Twitter: @zackstieber
Go Back: Science
Previous: What an Alaskan Raptor's Fossil Jaw Tells Us about Dinosaur Migration
Next: Thoughts For The Day, Move From the Center, A Poem?
source : www.theepochtimes.com
''

'Teeth The Size Of Bananas'; New Study Paints Picture Of 'Terror Crocodiles'
Supreme Court Victory: George Soros Can Now Be Labelled An Enemy Combatant
Citizen Abuse In Melbourne, Not Allowed to Go More Than 3 Miles From Your House, Wow
We should be thinking about what would be the fastest, most "practical", way to wake up the normies prior to the election, and how can it be "successfully" communicated to them?

Sunspots, Clouds, and Vulcanism, All Interlinked. Hypothesis by Nukepro.

Is The Information Safe Because It's On Bitchute? Don't Assume So, Download It, Here Is How
The Eternal Enemy øf Mankind - Know your Enemy And Fight Them --Zionists / Communists
The Psychology of Power - How to Dethrone Tyrants

U.S. Puts Kodak Deal On Hold Amid Scrutiny Of Its Finances