Sandra Bullock All Smiles With New BF After Years of Heartbreak, and Her Kids Love Him 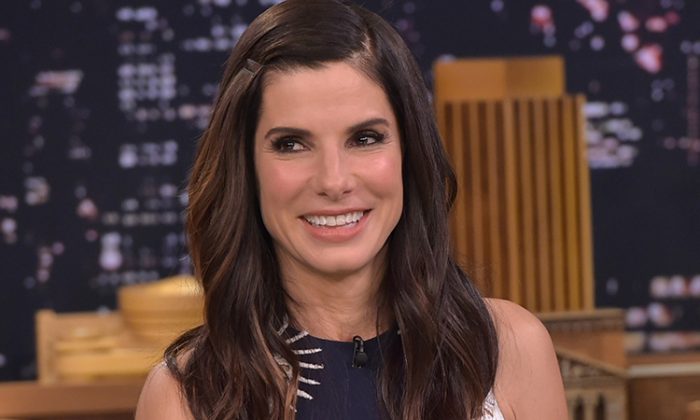 If anybody deserves to find happiness, it’s America’s favorite  funny lady, Sandra Bullock. Beautiful, smart, and with a movie back catalog that testifies to her acting talent, Sandra has been Hollywood hot property since starring in action-thriller movie Speed alongside Keanu Reeves in 1994.

How well do you perform under pressure?

So it seems unfair that Sandra has experienced such bad luck in her personal life, especially when it comes to romance. Sandra has preferentially kept a low profile outside of her movie and television commitments, but the actress opens up sporadically about her struggle to find “the one.”

Sandra met the handsome Tate Donovan while filming Love Potion No.9 in 1992, and the pair were briefly engaged before splitting up three years later. “I adored Tate so much,” Sandra lamented. “It’s like they say, there’s one person in your life, and Tate and I are closer than any two people I’ve ever experienced in my life … I can’t explain why things worked out the way they did.”

Later, in 1996, Sandra described a year of conscious dating as “the worst experience I ever had.”

“I seem to have attracted everyone whose intentions were not the best,” a frustrated Sandra revealed. “They were nice people but they just weren’t suited for me … I seriously thought I’m never ever going to find anybody that will love me and just enjoy life.”

Experience the best reviewed film of the year in theaters now: http://bit.ly/SeeGravity

But Sandra’s fervent dating exploits yielded brief periods of happiness as the actress enjoyed meaningful relationships with actors Matthew McConaughey and Ryan Gosling. She then married motorcycle builder and Monster Garage star Jesse James in July of 2005, but the pairing was troubled from the start.

The couple won full legal custody of Jesse’s then-5-year-old daughter from a previous marriage to Janine Lindemulder, but the following year, a scandal arose: an alarming number of women came forward, claiming that they had had affairs with Sandra’s husband Jesse.

But Sandra, keen to reclaim her life, successfully adopted a baby boy from New Orleans, Louisiana, as a proud single parent. In December of 2015, she adopted a second child. Sandra, with her delightful children Louis and Laila, achieved the loving family unit the actress had always looked forward to.

Why I Support Sandra Bullock’s Decision to Adopt Another Black Child https://t.co/UbFzbMuBl6 pic.twitter.com/gfpE5A4MvN

The family have only recently been comfortable stepping into the Hollywood limelight, and for good reason. “When you adopt a child, there’s a placement period, and if something goes sideways, they have the right to take the child away,” Sandra explained. “It’s a tenuous, strenuous six months.”

After Sandra made the commendable decision to move on with her life as an independent, single mother, other elements of her life seem to be falling into place like long-missing puzzle pieces. Romance, for one!

In 2015, Sandra approached photographer Bryan Randall and commissioned him to take photographs of her and her young family. Little did she know that sparks would fly: the pair have been dating ever since.

It bodes well that the actress’s children adore her new beau. “He’s super kind,” Sandra shared with InStyle. “For the kids he’s sort of No. 1 and I’m No. 2. I get it … he’s more fun and has better treats.”

Bryan certainly sounds like a keeper. Sandra, we hope you’ve finally found the happiness you deserve!

We wish all the happiness in the world for Sandra, her young family, and her new love. Share this article with all the Sandra Bullock fans you know!

Jamie Foxx defends Jimmy Fallon over 'SNL' blackface controversy: 'This one is a stretch'
Tom Hanks donates plasma again after recovering from the coronavirus: 'Plasmatic!'

Goldie Hawn offers advice to couples in quarantine together: Don't 'expect someone to be your keeper'

Slain UNC student’s mother hopes new documentary will shed light on unsolved murder: ‘I need to keep going for her’

Live events pose a 'unique challenge,' but there are 'opportunities' for fans to come back together: expert