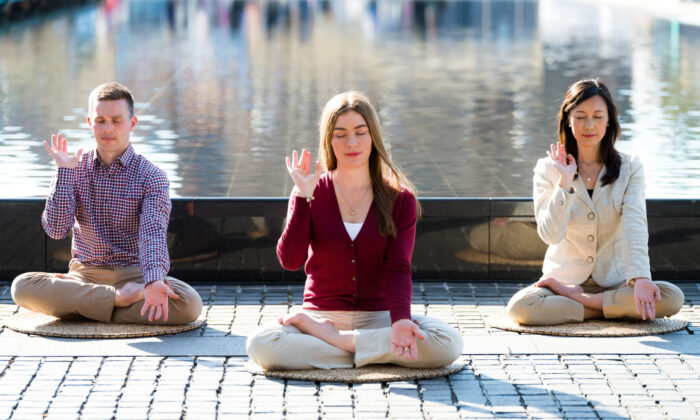 Sometimes it takes a pandemic to find the most important thing in one’s life.

When the District of Columbia issued quarantine orders, Courtney Dowe rushed to 10 stores in search of cleaning supplies and toilet paper, which panicked consumers had all but stripped from store shelves.

Fear and self-doubt began to take hold as Dowe flashed back to her traumatic childhood, when Child Protective Services took her and her siblings from her substance-abusing parents. The children, the youngest just six months old, were all separated. Growing up, Dowe moved around various foster homes, with eight years spent roaming around like a “semi-nomad.”

Her days spent homeless are long past, but the same sense of insecurity again enveloped her amid the recent chaos.

She then spent three days consumed by stress, before recognizing an element she had long neglected: her meditation.

Dowe practices Falun Gong, also known as Falun Dafa, an ancient spiritual meditation practice with moral teachings centered around the core tenets of truthfulness, compassion, and tolerance. She took up the practice 12 years ago and attributes her spiritual faith with helping her to find stability in life.

After her revelation, she started waking up earlier to make sure she had at least one hour to meditate in the mornings. That one hour, she said, brought a transformative difference to her outlook.

Grateful for her faith, Dowe, a musician, will be performing as part of a virtual concert in celebration of World Falun Dafa Day on May 13, when practitioners around the world commemorate the day the practice was first introduced in China in 1992.

On May 13, Sam Brownback, the U.S. ambassador-at-large for international religious freedom, wrote a message of support on Twitter: “On World Falun Dafa Day, we strive to uphold the universal tenets of truthfulness, compassion, & forbearance, ideals that are fundamental to the expression of the Falun Gong faith.

“No one should be persecuted for their beliefs, including Falun Gong in China.”

On World Falun Dafa Day, we strive to uphold the universal tenets of truthfulness, compassion, & forbearance, ideals that are fundamental to the expression of the #FalunGong faith and we reiterate that no one should be persecuted for their beliefs, including Falun Gong in #China.

The practice has been heavily suppressed in mainland China since July 1999, when then-Party leader Jiang Zemin began a nationwide persecution. Hundreds of thousands of adherents have been arrested, tortured, and detained in prisons, labor camps, and brainwashing centers, according to the Falun Dafa Information Center.

As the pandemic has kept hundreds of millions around the world isolated at home, the need to maintain spiritual well-being has become ever more urgent.

Amy Isabelle Duncan, a 29-year-old Falun Gong adherent from Australia, breathed a sigh of relief after the pandemic halted her plans.

Before the virus hit, Duncan was working a high-pressure corporate job, studying part-time, and starting up her own coaching business while attending various conferences. She was always busy ticking things off her to-do list. There was little time to chat with family members over a meal or keep up with her meditation.

“With [all my activities] being forcibly taken away from me, it just really helps me get things into perspective of what’s most important—because all of a sudden, I had more time on my hands,” she told The Epoch Times.

Recently let go from her job, her daily routine now consists of meditating, walking in the sun, and sitting at the dining table with her family.

She described the pandemic as “a bit of a wake-up call.”

“I’ve got all my fancy clothes and shoes in the cupboard, and they’re just kind of sitting there. … It all feels very unimportant at the moment,” she said.

For Dowe, having spiritual guidance also instilled newfound patience and calm when dealing with the unexpected.

Recently, her son, who is turning 8 and studying at home since local schools moved classes online, accidentally splashed black watercolor paint on the carpet. While that upset her initially, Dowe checked herself. She told her son to go to the other room while she cleaned up.

“Right now, with everything happening in the world, it’s a good time to practice letting go, to try not to worry so much, because that doesn’t change anything in life,” she said.

The yearning for mindfulness seems to have struck a chord around the globe.

Ani Asvazadurian, a 38-year-old fashion designer from Vienna, helped start a Facebook group in late March to bring the world’s meditation enthusiasts together. The group has drawn about 1,200 followers.

The inspiration “just happened naturally,” said Asvazadurian, also a Falun Gong adherent. She found herself with more free time after being laid off from her job. Seeing more people share messages of hope online has inspired her to share the benefits of the practice, which has helped keep her emotionally healthy during the pandemic, she said.

A girl whom she met briefly last year while meditating in a park reached out to her after seeing her meditation videos on Facebook and later joined the group. They have done the practice’s slow-moving exercises together over Skype three times so far.

Recently, Duncan, also a member of the Facebook group, started a five-day live session demonstrating the five sets of Falun Gong exercises. About 20 people joined her each time, with half a dozen newcomers at each session. One woman shared that she’d noticed an improvement in her rheumatoid arthritis, while another experienced better blood circulation, Duncan said.

“They said that they felt really connected [in knowing] that we were all meditating together at the same time around the world,” she said.