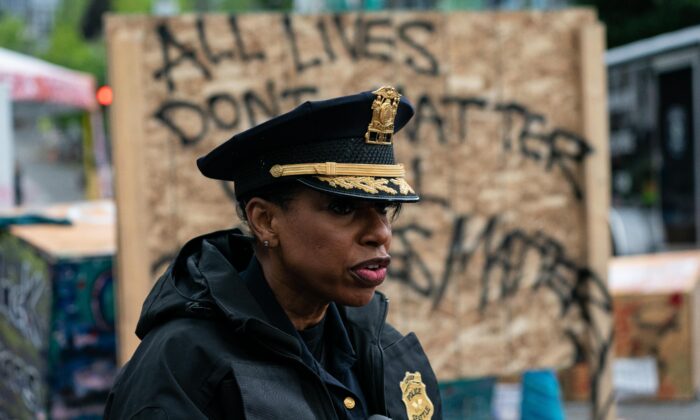 Seattle Police Department Chief Carmen Best, in a letter to the Seattle City Council, wrote that protesters and agitators targeted one of her homes on Saturday night in nearby Snohomish County.

Best wrote that her neighbors “were successful in ensuring the crowd was not able to trespass or engage in other illegal behavior in the area, despite repeated attempts to do so.”

“I urge both of you, and the entire council, to stand up for what is right,” Best wrote. “These direct actions against elected officials, and especially civil servants like myself, are out of line with and go against every democratic principle that guides our nation. Before this devolves into the new way of doing business by mob rule here in Seattle, and across the nation, elected officials like you must forcefully call for the end of these tactics.”

Best noted that while it’s appropriate for demonstrators to exercise their rights to peacefully protest in the wake of George Floyd’s death in May, “all of us must ensure that this righteous cause is not lost in the confusion of so many protesters now engaging in violence and intimidation, which many are not speaking against.”

Photos posted by the Lynnwood Times showed dozens of vehicles lining the streets of a small residential community. It reported that a crowd of about 200 “mostly white men and women in their twenties,” who were “dressed in black with masks and black hoods” were seen carrying Black Lives Matter signs. They were also seen carrying bags with unknown contents.

According to the report, agitators shouted insults and residents, wrote down license plate information of vehicles, took photos of homes, and asked children what schools they attended.

Neighbors told the Lynnwood Times that their information was disclosed on social media, apparently by the agitators.

“I feel incredibly unsafe,” said a neighbor, who was not identified. “We think it will happen again… Their objective was not completed; they never made it to her house, we stopped them… so we think they will be back.”

Last month, demonstrators gathered in Seattle Mayor Jenny Durkan’s neighborhood in an attempt to send her a message. According to reports at the time, they wanted to see the Seattle Police Department’s budget cut by 50 percent.

Protesters and agitators also appeared at the homes of some City Council members, according to KOMO News.