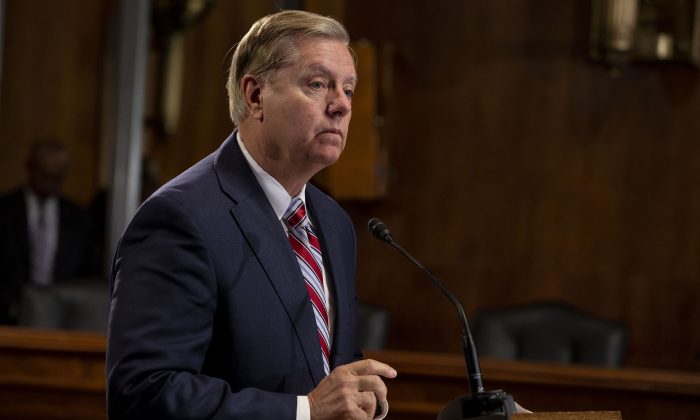 WASHINGTON—Legislation being introduced into the Senate is aimed at closing the legal loopholes that allow hundreds of thousands of illegal immigrants to enter and stay in the United States without a valid asylum claim.

Sen. Lindsey Graham’s (R–S.C.) bill, titled “Secure and Protect Act of 2019,” outlines four main fixes. The first one says asylum must be claimed in either the individual’s home country or in Mexico. That will prevent illegal immigrants from gaining access to the United States unless their claim is approved.

Under the current system, if an adult brings a child illegally into the United States and claims asylum, there is a 98 percent chance they will stay indefinitely. In some areas, where the Border Patrol is overwhelmed, fewer than 10 percent of illegal aliens claim asylum, but are still released after 48 to 72 hours.

The bill also provides a fix to the Flores Settlement Agreement, which was expanded by a judge in 2015 and has, in part, contributed to the surge in family units since then. In 2015, U.S. District Judge Dolly Gee of the Central District of California said no minor can be held in detention longer than 20 days. Previously, that rule only applied to unaccompanied minors, not those who were part of family units. The result is that families are released within a few days.

Former Homeland Security Secretary Kirstjen Nielsen estimated that 1 million illegal immigrants will be apprehended this fiscal year. The largest increase of illegal border crossers are family units. More than half of the 460,000 Border Patrol apprehensions so far this fiscal year are individuals within family units—a 400 percent increase over the same time period in fiscal 2018.

Graham’s bill wants to increase the time in detention to 100 days, which would allow for the adjudication of an asylum case, and a quick deportation if status is not granted.

“I’m trying to turn the faucet off. These loopholes are creating a humanitarian crisis,” Graham said in a press conference on May 15. “If we do nothing, what’s it going to look like next year?”

In conjunction, Graham wants an additional 500 immigration judges hired to help adjudicate the cases and clear the almost 900,000-case backlog that exits.

Lastly, the bill aims to even out the disparity in the Trafficking Victims Protection Reauthorization Act (TVPRA), under which currently a minor from Mexico or Canada (a contiguous country) may be quickly returned to that country if they are not a victim of trafficking; minors from any other (noncontiguous) country cannot be returned.

“If you think this is a Trump-created problem, you really just hate Trump. Because this problem has been long in the making before Trump got here,” Graham said.

He said he will hold a hearing to discuss the bill and then a markup session. He expects Democrats to add amendments to the bill, including for more aid to Central American countries and some type of amnesty for a population of illegal immigrants in the United States, probably Deferred Action for Childhood Arrivals (DACA) recipients.

He intimated he was open to adding both.

“To any Republican who doesn’t want to find a solution, then you own the problem,” he said. “The Democratic Party has marginalized this issue—they have told you this is not a problem, [that] Trump created this problem. When President Trump made his State of the Union speech, every Democrat said ‘This is just Trump hysteria, Trump demagoguery.’

“To my Democratic colleagues, your credibility on this issue is pretty low right now. You need to understand that you were wrong. This was a real problem.”

In February of last year, four immigration-related bills failed in the Senate, while another two failed in the House over the summer.

Trump has maintained that he will sign a reasonable bill that closes the border security loopholes and moves toward a merit-based immigration system. Senate Republicans met with Vice President Mike Pence and White House advisor Jared Kushner on May 14 to discuss Trump’s immigration priorities.

Follow Charlotte on Twitter: @charlottecuthbo
Go Back: US News
Previous: In Appreciation of Trump’s Work 3 Florida Radio Stations to Air His Speeches Every Hour, Every Day Until 2020 Elections
Next: Coast Guard: 2 More Bodies Found After Alaska Planes Crash
source : www.theepochtimes.com
''