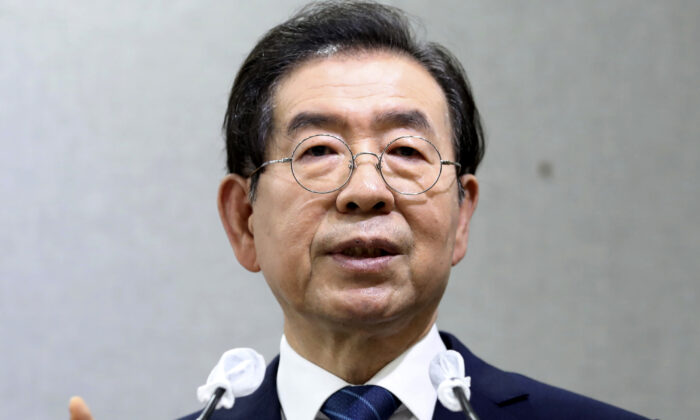 The mayor of Seoul, South Korea, was found dead hours after he was reported missing, police said.

Park Won-Soon was reported missing by his family on Thursday night local time, according to officials.

Authorities on Friday told the official Yonhap News Agency that Park was found dead in northern Seoul, the capital and largest city in South Korea.

Park’s daughter had told police her father’s cellphone was turned off after leaving their home. He also left a message that sounded like a will.

Other details about his death were not provided.

Park, a 64-year-old civic activist had been Seoul’s mayor since 2011, was seen as a possible presidential candidate in the 2022 elections.

Reports from South Korean news outlets claimed said one of Park’s secretaries had lodged a complaint earlier this week with officials about an alleged sexual harassment incident.

The person, who was described as “Ms. A” in a report from SBS News, alleged that the harassment started in 2017, when she began working for Park. The Seoul Metropolitan Police Agency and Park’s office have both told news outlets that they could not confirm the reports of harassment.

His daughter called police on Thursday afternoon and said her father had given her “a will-like” verbal message before leaving their home hours earlier. The daughter didn’t explain the contents of the message, said an officer at the Seoul Metropolitan Police Agency who was responsible for the search operation.

Kim Ji-hyeong, a Seoul Metropolitan Government official, said Park did not come to work on Thursday for unspecified reasons and had canceled all of his schedule, including a meeting with a presidential official at his Seoul City Hall office.

Police officer Lee Byeong-seok told reporters that Park was last identified by a security camera at 10:53 a.m. at the entrance to the hills, more than six hours before his daughter called police to report him missing.

About 600 police and fire officers using drones searched unsuccessfully for hours Thursday evening. Fire officer Jeong Jin-hyang said rescuers were using dogs to search dangerous areas on the hills, and helicopters would be deployed Friday morning if Park were not found overnight.

As a lawyer, he was credited for winning the country’s first sexual harassment conviction. He has also been an outspoken critic of Japan’s colonial-era policies toward Korea, including the mobilization of Korean and other women as sex slaves for Japanese soldiers.

Go Back: World News
Previous: China sides with WHO, rebukes US withdrawal from the health agency
Next: U.S. Broadcasting Agency Will Not Extend Visas For Its Foreign Journalists
source : www.theepochtimes.com
''