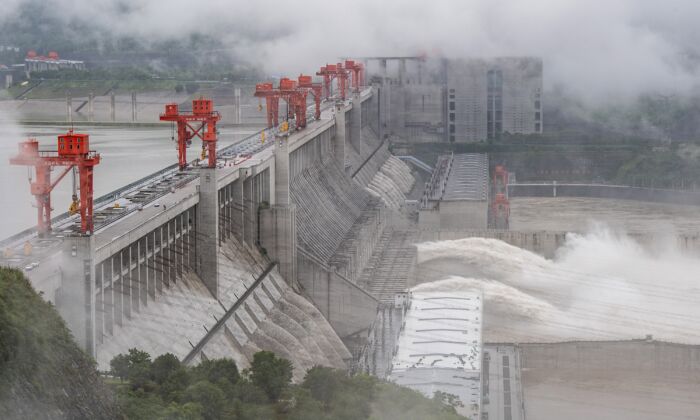 The southwestern Chinese megacity of Chongqing is the latest area to be hit by flooding, as southern parts of the country battles with the worst flooding it has seen in decades.

Weeks of heavy rainfall have wreaked destruction across 26 provinces, affecting 19 million residents. At least 106 people have been confirmed dead or missing.

Chongqing has been lashed by intense rains since July 1, affecting 28 of its 38 counties, according to a July 2 report by Chinese state-run People’s Daily. The highest rainfall reached 128mm (5 inches) that day.

Waters in 116 local rivers rose one to ten meters (3.3 feet to 32.8 feet). State news agency Xinhua quoted Chongqing city officials on July 2 saying that water levels of 12 rivers are higher than the upper limits, meaning the banks may burst at any time.

At least one person has died, and one is missing, the report said, adding that almost 60,000 have been affected by the floods in the city.

Local authorities in one area in Chongqing have warned those who live on the fourth story or below in buildings close to rivers to be prepared to evacuate.

“Chongqing Hydrological Bureau told us that the flooding this year is very bad,” an official from Shanhuwan neighborhood in Chongqing told the Chinese-language Epoch Times by phone on July 2.  The official said intense rains have been forecasted for the entire month in Chongqing.

“The residents who live on the fourth floor and lower should start preparing for evacuation, so once flooding starts, they can quickly escape,” they added.

The official said if the water levels in Shanhuwan reach 180 meters (590 feet), it will submerge the first floor; at 190 meters (623 feet), it will flood areas higher than the second floor, so the third and fourth floors also need to be on guard.

Two rivers pass through Chongqing, the Yangtze river and Jialing river. In 1981 when water levels of both rivers reached 193 meters (633 feet), 15 million people were affected, and 1.5 million lost their homes.

Mr. Liu, a resident in Qijiang district in Chongqing, told the Chinese-language Epoch Times on July 2 that the downtown area in the district flooded the day before, and the water levels of the Qijiang river swelled by three meters (10 feet).

“The first floor of many buildings were submerged by floodwaters,” Liu said.

A surveillance camera caught the moment a mudslide buried a highway in Chongqing on July 1.

The Epoch Times called Chongqing Highway Service Center on July 2, and was told that the highway has now been closed.

“Both directions were buried,” the operator said. “The mudslide was very severe.”

The same day, Chinese Ministry of Water Resources announced: “As of noon of July 1, the water level of 304 rivers in China have exceeded critical limits.”

The ministry said July and August are critical periods to control the flooding.

Britain, Japan ‘Stand Side by Side’ on Hong Kong: UK Foreign Secretary