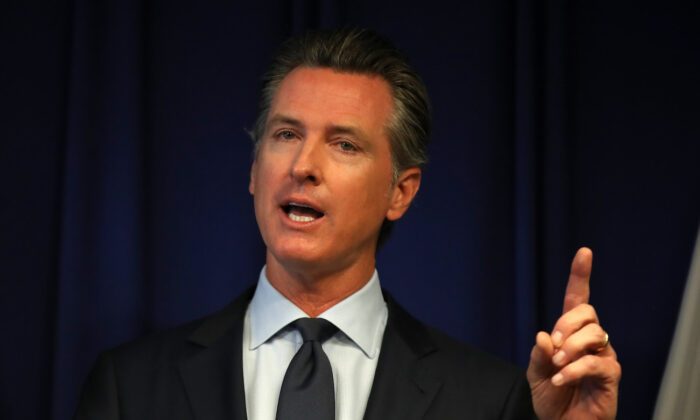 Newsom on Thursday ordered a three-week COVID-19 lockdown for the state on a regional basis, with stay-at-home orders to be implemented in areas hardest hit by the CCP (Chinese Communist Party) virus.

When intensive care unit (ICU) beds fall below 15 percent at a region’s hospitals, that would trigger tougher social and economic restrictions in that region, forcing certain businesses and public facilities to close, Newsom announced.

“Ironically, it wasn’t that long ago that our same governor loudly and publicly argued how wrong it was for the president of the United States to withhold federal funding from states not complying with federal laws,” Bianco said.

“The dictatorial attitude toward California residents while dining in luxury, traveling, keeping his business open, and sending his kids to in-person private schools is very telling about his attitude toward California residents, his feelings about the virus, and it is extremely hypocritical,” he said. “These closures and stay-at-home orders are flat out ridiculous. The metrics used for closures are unbelievably faulty and are not representative of true numbers and are disastrous for Riverside County.”

The sheriff added: “[Newsom] is expecting us to arrest anyone violating these orders, cite them and take their money, close their businesses, make them stay in their homes, and take away their civil liberties or he will punish all of us. I believe that all jobs are essential to someone. Leaders do not threaten, attempt to intimidate, or cause fear—bullies do.”

Bianco encouraged residents to wear masks and distancing and said that the sheriff’s department is asking residents to act responsibly.

The Los Angeles County Sheriff, Alex Villanueva, informed FOXLA on Friday that deputies in the county will not be enforcing stay-at-home orders at businesses, adding that it is the health department’s job.

Villanueva also told the station: “I want to stay away from business that are trying to comply. They bent over backwards to modify their operations to conform to these orders and then they have the rug yanked out from under them. That’s a disservice. I don’t want to make them more miserable.”

The San Bernardino County Sheriff’s Department told the station that it is not intending to have deputies respond to complaints about health orders from the governor, and that any complaints will be addressed on a case-by-case basis. Meanwhile, the Orange County Sheriff’s Department said it would release a statement on Dec. 5, but referred to their previous statement on Newsom’s recent curfew order, when it said that it would not participate in enforcing the order.

The governor’s office did not immediately respond to a request for comment from The Epoch Times.

Follow Mimi on Twitter: @MimiNguyenLy
Go Back: US News
Previous: Arizona House Speaker Rejects Trump Campaign Call to Overturn Election
Next: Trump Heads to Georgia to Rally for Loeffler, Perdue With Control of Senate Up for Grabs
source : www.theepochtimes.com
''

USPS temporarily removes, suspends mail collection in some major cities ahead of inauguration