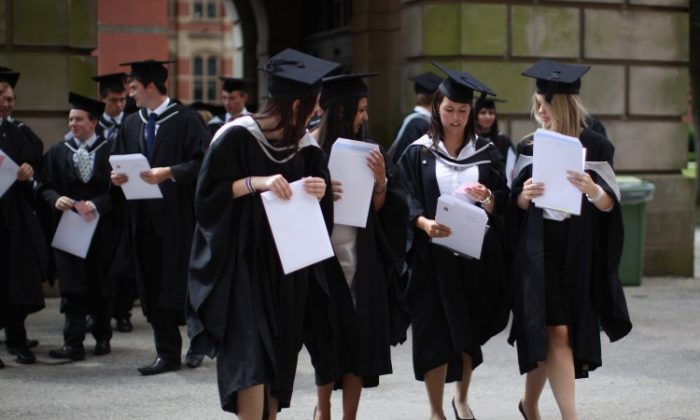 In this file photo, students at a UK university graduate on July 14, 2011. A few UK universities may be facing serious financial problems following losses caused by the CCP virus pandemic, the IFS said on July 6, 2020. (Christopher Furlong/Getty Images)
Updated: 2020-07-07 15:30:10

Serious financial problems, even bankruptcy, may be looming for some UK universities following the onslaught of the CCP virus, the Institute for Fiscal Studies (IFS) said on Monday.

Reduced lockdown-related incomes and large university-sponsored pension scheme obligations could put pressure on some universities that were in a weaker financial position before the arrival of the CCP (Chinese Communist Party) virus.

“For around a dozen of these institutions, insolvency is likely to become a very real prospect without a government bailout,” IFS research economist Ben Waltmann said a statement.

A targeted bailout to keep afloat these “generally less-prestigious institutions,” which teach around 5 percent of students, could cost a relatively modest 140 million pounds ($174.8 million), the IFS estimated.

The higher education sector overall—which has 45 billion pounds ($56.1 billion) in reserves and a pre-CCP virus annual surplus of 2 billion pounds ($2.4 billion)—is likely to be able to withstand the pandemic-related losses, Waltmann said.

The IFS findings revealed that establishments facing the biggest potential losses are those with a larger share of international students and more pension-related obligations. Those are usually “higher-ranking universities, postgraduate-only institutions or prestigious arts schools,” the IFS said. But they were also the institutions most likely to survive the crisis as they “were highly profitable before the crisis and have substantial financial reserves.”

The IFS pointed out that any bail-out packages may not focus on preventing bankruptcy alone, but that “government will certainly need to be clear about the aims of any such package.”

“More widespread and less targeted packages, as proposed by some in the university sector, could cost billions of pounds without providing much support to those institutions most at risk of going under,” the economic research institute said.

Commenting on the IFS findings, Josh Hillman, director of education at the Nuffield Foundation, said that the “report highlights the role that more general reforms could play to help alleviate the financial pressures faced by the higher education sector.”

Hillman highlighted the Augur Review recommendation, which he said proposes “a lifelong learning loan allowance for tuition fees that would encourage enrolment in higher education courses below degree level, which would help less selective universities … and may also enable people who have lost their jobs as a result of COVID-19 to reskill.”