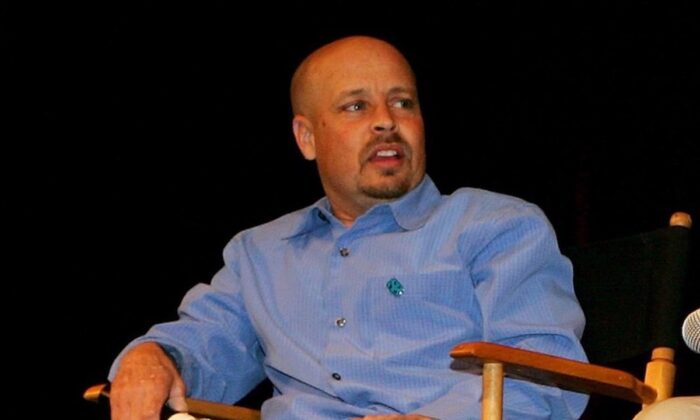 Eisenberg’s wife, Malissa Longo, confirmed on September 21, 2019, that her husband had died.

Longo said in a post on social media that Eisenberg had earlier in the day been hospitalized in critical condition.

“He was an intelligent, humble, funny, empathetic soul,” Longo said in the post. “He sought to live his life with integrity and truth.”

No announcement has been made as to Eisenberg’s cause of death.

According to his IMDB entry, Eisenberg had 26 acting credits to his name, perhaps most notable being Star Trek: Deep Space Nine. He appeared in over 40 episodes of the cult series, where he portrayed Nog, the first Ferengi to join the Starfleet crew.

Eisenberg once told Red Carpet News TV in an interview that it took about an hour and a half to apply all the makeup for Nog, which Wired magazine ranked the 51st most important character in the Star Trek universe, just after Captain Willard Decker.

Aron Eisenberg goes toe-to-toe with Avery Brooks in this memorable scene from “Heart of Stone,” demanding that Nog gets a shot at Starfleet Academy. #StarTrek #AronEisenberg pic.twitter.com/7zpAp4e3Jn

“Quite miraculously, Eisenberg spent only four months on the waiting list before finding a match. That match? A friend named Beth Bernstein, who’d seen Eisenberg’s Facebook post about needing a new kidney, offered to donate one of hers to him, and was a match for Eisenberg. ‘She is just so incredibly selfless to give to me like this,’ Eisenberg told StarTrek.com in 2015, ‘that words cannot express my gratitude to her.'”

Armin Shimerman, who played a Ferengi bartender on Star Trek: Deep Space Nine, shared a tribute, saying that with Eisenberg’s death “the world has lost a great heart.”

I have lost a great friend and the world has lost a great heart @AronEisenberg He was a man of conviction and enormous sensitivity and the best of humanity. Kitty and I grieve for Aron, his boys, and Malissa. Flights of angels my friend…you will be missed. There are no words… https://t.co/Q18yIVeZEe

Star Trek actor Chase Masterson, who portrayed Leeta on Star Trek: Deep Space Nine, wrote, “We are aching and sorry more than words can ever say. Rest In Peace, @AronEisenberg. We will always love you and Nog.”

We are aching and sorry more than words can ever say. Rest In Peace, @AronEisenberg. We will always love you and Nog💔

We love you, Malissa. You are family, and you always will be🙏 https://t.co/yaOXTNbeAy

Robert Hewitt Wolfe, a writer on Star Trek: Deep Space Nine, said in a tweet, “Aron dealt with health issues his whole life but never let that stop him from living it to the fullest. He was a talented actor and a wonderful person. He will be greatly missed.”

Heartbreaking news. #DS9’s @AronEisenberg has passed away. Aron delt with health issues his whole life but never let that stop him from living it to the fullest. He was a talented actor and a wonderful person. He will be greatly missed. https://t.co/ShMWZbNCy0

https://t.co/4kPK1NYbPA is saddened to report the passing of Aron Eisenberg #StarTrek #RestInPeace https://t.co/XNPPAzZkjF

Follow Tom on Twitter: @OZImekTOM
2019-09-22T09:30:03-05:00
Go Back: Entertainment
Previous: ‘Captain America’ Chris Evans Tells All About His Wish to Get Married and Have Kids
Next: Antonio Brown Says He’s Finished With the NFL, Goes After Patriots Owner
source : www.theepochtimes.com
''