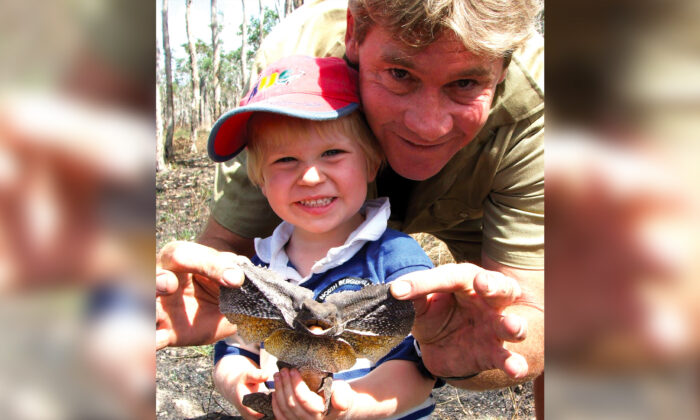 The world mourned the passing of wildlife enthusiast and TV personality Steve Irwin almost 13 years ago, but his teen son Robert is keeping his father’s legacy alive by recreating an iconic moment.

Robert uploaded a side-by-side photo of Irwin, the notorious “crocodile hunter,” feeding a crocodile named Murray beside a photo of himself feeding the very same croc, 15 years later.

The uncanny similarity even extends to the looks of concentration on the faces of both father and son, and their stance as they lean forward to drop a piece of meat into the expectant crocodile’s mouth. Crowds sit behind the crocodile feeders in both photos.

Speaking to the Daily Mail in May 2019, Robert confirmed that his passion for wildlife is just as real as his father’s was. “We never know how long we are going to be on this earth for,” he said, “you’ve got to make the most of every day.

Irwin’s infamous wildlife show “The Crocodile Hunter” began in the mid-1990s and graced TV screens until Irwin’s untimely death at the age of just 44. In September 2006, Irwin was filming an underwater scene for TV when a stingray’s stinging barb pierced him in the chest, puncturing his heart.

The wound was fatal. Irwin and his wife Terri’s daughter Bindi was just 8 years old at the time. Their son, Robert, was only 3.

Irwin’s infectious enthusiasm and daredevil personality had won him fans around the world. Even his idiosyncratic Australian catchphrase, “Crikey!” won hearts.

Collectively wishing to keep their beloved husband and father’s legacy alive and kicking, the Irwins eventually named their Animal Planet show, launched in 2018, “Crikey! It’s the Irwins” in honor of the Crocodile Hunter himself.

Irwin’s teen son has flourished as a television personality in his own right since hosting “Robert’s Real Life Adventures,” a program screened on the Australia Zoo’s internal TV network.

The family, together, has diligently continued Irwin’s conservation work in Australia since his death.

Terri, 55, Bindi, now 21, and Robert all contribute to running the Australia Zoo and the family’s non-profit organization Wildlife Warriors, and they continue to support various conservation projects for endangered animals worldwide.

“I think now, even more so than when Dad was around, our wildlife is really being depleted as such an incredibly rapid rate,” Robert said, speaking to LadBible.

“I think it’s so important that we can learn to love and respect all animals and natural places,” the teen adds, “not just the cute and cuddly creatures.”