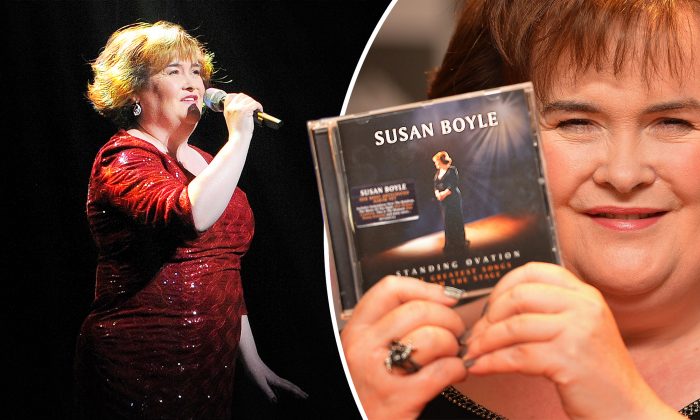 Scottish singer Susan Boyle won herself a legion of loyal fans, and Simon Cowell’s admiration, after stunning the nation with her blind audition on “Britain’s Got Talent” back in 2009.

Since then, Susan, 58, has delighted audiences worldwide with her soaring vocals and passionate performances. But one song in particular, “You’ll Never Walk Alone,” deserves a moment for its intimate connection with Susan’s greatest love of all: show tunes.

Three years after her first album I Dreamed a Dream became the United Kingdom’s best-selling debut album of all time, Susan decided to revisit the origin of her passion for singing. “My earliest memories are of trying to put on concerts for my teddies,” the born performer told The Guardian.

“I have been trying to play the piano since I can remember,” she lamented, “and I am still learning.”

The nostalgic singer chose to cover the classic show tune “You’ll Never Walk Alone” from the 1945 Rodgers and Hammerstein musical “Carousel,” and the result was a captivating performance that fans are still talking about today.

Susan’s rendition of “You’ll Never Walk Alone” made it onto the star’s fourth studio album, 2012’s “Standing Ovation: The Greatest Songs from the Stage.” The album in its entirety is a crowd-pleasing collection of golden oldies, but for many, this song stands out from the rest.

After Susan’s rendition of “You’ll Never Walk Alone” was shared on YouTube, the singer’s fans rushed in to listen and share their thoughts. “Natural voice, beyond imagination,” wrote one happy fan. “So perfect.”

“One of my all time favorite songs sung with such beauty,” added another. “Susan, you are so blessed by God. Thank you for sharing your extraordinary talent.”

In the second act of the musical Carousel, Nettie Fowler, the cousin of the protagonist Julie Jordan, sings “You’ll Never Walk Alone” to comfort Julie; her husband, Billy Bigelow, has fallen on his knife and died after a failed robbery.

The song was later resurrected as a football chant, a tradition that developed at Liverpool Football Club in the north of England after a group named Gerry & the Pacemakers had a number one hit with their cover in 1963.

Susan, however, took the song back to its traditional roots.

With the swell of a full orchestra behind her, Susan’s cover has all the emotive prowess of the original. Her fans adore it.

The song also received widespread critical acclaim. “The first time we ever laid eyes on Susan Boyle she was singing ‘I Dreamed A Dream’ from Les Misérables,” wrote the Express, “so this album of songs from musicals was only a matter of time.”

For Susan, the magic will always be in the performance. “I’m in my own little bubble on the stage,” the singer told People, “conveying a story. It really is my happy place.”

Susan Boyle is preparing for a U.K. tour in 2020. Many fans, no doubt, are hoping that “You’ll Never Walk Alone” will be on the setlist.