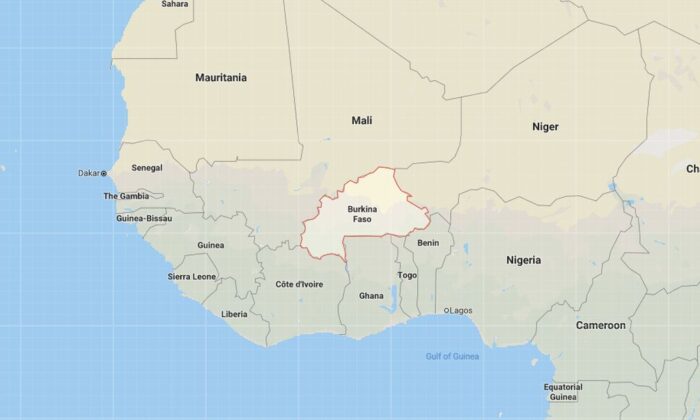 Burkina Faso, where more than a dozen people were killed during a terrorist attack on a Protestant church in Hantoukoura on Dec. 1, 2019. (Google Maps)

The president of Burkina Faso said on Sunday that more than a dozen people were killed during a suspected terrorist attack on a Protestant church in Hantoukoura, located in the east of the West African country.

On Twitter, President Roch Marc Christian Kabore said Sunday that he condemned “the barbaric attack” in the town of Hantoukoura. He added that several people were wounded.

“I condemn the barbaric attack on the Protestant Church of Hantoukoura in the department of Foutouri which left 14 dead and several wounded,” he wrote on Twitter, according to a translation from French to English. “I extend my deepest condolences to the grieving families and wish a speedy recovery to the injured.”

Reuters reported that at least 14 people are confirmed dead in the attack. Hantoukoura is located near the border of Niger.

A security source told the AFP news agency that the gunmen “[executed] the faithful, including the pastor and children” in the church.

No group has yet to claim responsibility, but in recent years, Islamic terrorist groups have increasingly claimed responsibility for similar attacks, including one in September that left several dozen soldiers dead.

The West African affiliate of the ISIS terrorist organization claimed responsibility at the time, it was reported.

According to The Associated Press, Islamic terrorist groups have been active in Burkina Faso since at least 2015. Jihadists have carried out attacks on churches and police stations in the northern part of the country, but the report noted that attacks in the east have become more commonplace in recent days.

Due to the rise of extremism, large parts of Burkina Faso’s north region have become ungovernable, namely near the Mali border. In the past year, violence in the country has left hundreds dead and forced hundreds of thousands to flee their homes, Reuters noted.

In September, President Donald Trump and Vice President Mike Pence highlighted the persecution of Christians around the world, namely in China and in Iran.

Earlier this year, former UK Foreign Secretary Jeremy Hunt helped draft a report saying the persecution of Christians is at near “genocide” levels and that “political correctness” has played a role, the BBC reported.

“Evidence shows not only the geographic spread of anti-Christian persecution, but also its increasing severity,” according to the report. It highlighted that Christianity may be “wiped out” in the Middle East.

US Condemns Attacks on People of Idlib, Calls for Ceasefire

Coronavirus is spreading from China, how to stop it

Massacre of Christians in Nigeria: Thousands killed for their faith, media ‘silent’