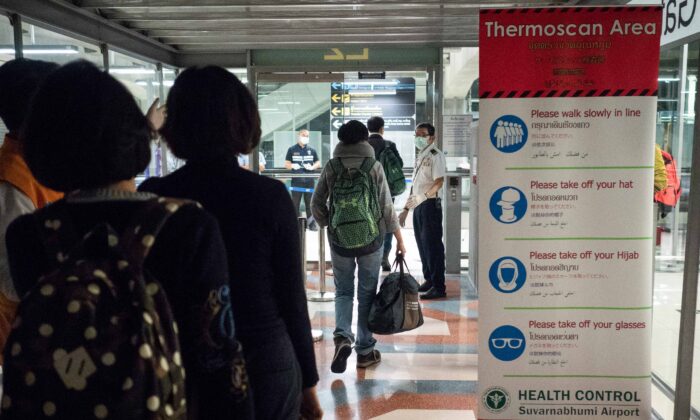 NEW YORK—U.S. health officials said they will start screening passengers traveling from central China at three U.S. airports to check whether they have contracted a new and potentially deadly virus.

The virus, which causes a severe form of pneumonia, has killed two and sickened dozens in China and across Asia.

Health officials said they will take temperatures and check for signs of fever and other pneumonia-like symptoms.

Wuhan authorities first confirmed the outbreak in late December. They said 45 are currently hospitalized for the disease.

Meanwhile, Thailand has confirmed two cases of infection, and Japan one case—all visitors who recently traveled to Wuhan—prompting fears of a possible international epidemic.

The last time the U.S. agency issued such measures was during the 2014 Ebola outbreak, when authorities screened thousands of travelers coming from Guinea, Liberia, and Sierra Leone in West Africa.

As many as 5,000 people could go through the screening over the next few weeks, Martin Cetron, director of the division of global migration and quarantine at the CDC, said at a media briefing held over the phone. Roughly 60,000 to 65,000 people travel from Wuhan to United States annually, according to Cetron.

The World Health Organization (WHO) on Thursday encouraged “all countries to continue preparedness activities” in light of the Japan case, the second confirmed outside of China. It said that there are likely more cases in other countries given the global travel patterns. The CDC on Friday expressed a similar view. The WHO did not rule out the possibility of human to human transmission.

“This is a serious situation,” Nancy Messonnier, the head of CDC’s National Center for Immunization and Respiratory Diseases, said on Friday, noting that the virus looks similar to the pathogens responsible for “serious and complex” outbreaks of MERS (Middle East respiratory syndrome) in 2012 and SARS (severe acute respiratory syndrome) in 2002. She said that the agency is taking a “cautious and proactive” approach to the pathogen while awaiting further information.

“It doesn’t take much for a virus in general to go from being worrisome to being especially worrisome, because they tend to morph and mutate a lot,” she said.

No known cure for the disease are available at this time. There are no screening measures in the Wuhan airport or anywhere else in China, according to Cetron. He stressed that screenings are only taking place “on the receiving end” so far.

Chinese health authorities said on Jan. 16 that they have identified 763 people, including healthcare workers, who have had close contact with the patients. Of them, 665 have been discharged and 98 are under medical observation.

Authorities have linked the outbreak to a seafood market where a number of patients have worked or frequented, but said they are still investigating the cause. The market has been shut down since Jan. 1.

Multiple countries and regions, including Taiwan, Hong Kong, Macau, Singapore, South Korea, and the Philippines, have stepped up their screening measures at ports of entry to detect possible cases of the Wuhan pneumonia.