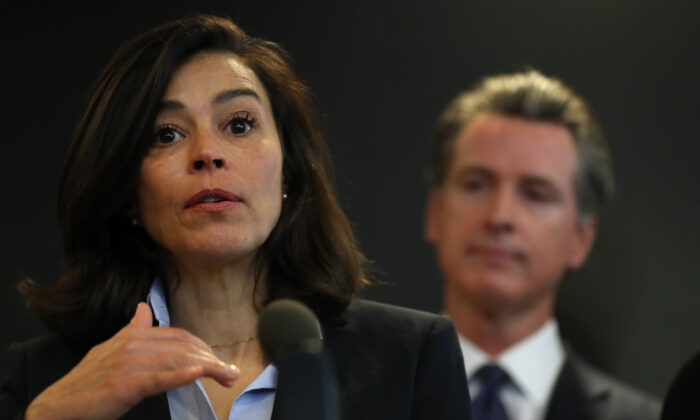 In a message to colleagues, Dr. Sonia Angell announced her departure. She did not give a reason for her resignation but touched on the impact of the COVID-19 pandemic.

“Since January, when we got word of repatriation flights arriving from Wuhan, China, our Department has been front and center in what has become an all-of-government response of unprecedented proportions to COVID-19. Not one of our staff has gone untouched by the changes that have occurred. Not in our professional lives or our personal lives,” she wrote.

Angell, who directed the state Department of Health, praised health workers for stepping up and getting work done.

COVID-19 is a disease caused by the CCP (Chinese Communist Party) virus.

The system failure “also prevented counties from having some of the data they need to monitor and respond to the virus in their communities,” Dr. Mark Ghaly, California’s health secretary, told reporters in a virtual press conference on Aug. 7.

Officials blamed temporary changes put into place after a server outage on July 25.

A separate problem, where the state failed to receive data from one of its largest commercial labs, stemmed from the state not renewing the lab’s certificate.

Ghaly said there’s an investigation underway, telling reporters that officials are aware that people at the state Health and Human Services and Department of Public Health “were knowledgeable of some of these challenges.”

The current system is not built for the large volume it is processing during the pandemic and officials have accelerated the development of a brand new system.

In a statement Sunday night, Newsom said, “I want to thank Dr. Angell for her service to the state and her work to help steer our public health system during this global pandemic, while never losing sight of the importance of health equity.”

Follow Zachary on Twitter: @zackstieber
Go Back: US News
Previous: Trump: Nomination Acceptance Speech Will Be in Gettysburg or DC
Next: Arson Rumors Rage Along With Apple Fire
source : www.theepochtimes.com
''