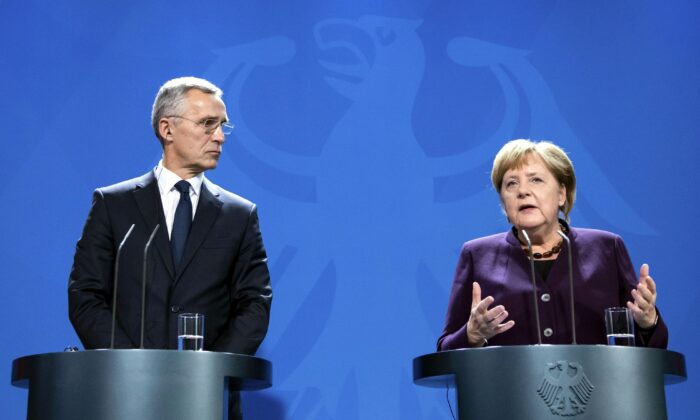 Trudeau, who met Thursday with re-elected, newly elected and defeated Liberal MPs on Parliament Hill, said NATO continues to play an important role in bringing Canada and its allies together in the name of collective security and shared values.

Canada is a founding member of the North Atlantic Treaty Organization, which was created in 1949 in response to threats from the Soviet Union and remains one of this country’s most important military alliances.

NATO’s membership also includes France and the United States, with all members having pledged that an attack on one is an attack on all.

Yet in an interview published by The Economist magazine, French President Emmanuel Macron warned that European allies must re-assess the alliance given recent U.S. actions under President Donald Trump.

Those include the sudden withdrawal of U.S. troops from northeast Syria, a plan to withdraw American troops from Afghanistan before talks with the Taliban broke down, and criticism by Trump of other NATO members for not spending enough on their own defence.

Those complaints are expected to figure prominently when NATO leaders meet in London in December.

Trump has also questioned why the United States would send troops to defend some eastern European countries.

“What we are currently experiencing is the brain death of NATO,” Macron told The Economist in the interview published Thursday. He added the United States under Trump appears to be “turning its back on us,” specifically citing the U.S. troop withdrawal from Syria.

“So as soon as you have a member who feels they have a right to head off on their own, granted by the United States of America, they do it. And that’s what happened.”

When asked about the French president’s comments, Trudeau said: “NATO continues to hold an extremely important role not just in the North Atlantic but in the world as a group of countries who come together to share values, that share a commitment to shared security.

“And quite frankly the fact that Canada has been able to show significant leadership both in Baghdad leading the training mission in Iraq and on the eastern front of NATO in Latvia are examples where NATO still very much has an important role to play.”

Canada currently has about 250 military trainers involved in a NATO mission to train local forces in Iraq and another 600 troops participating in a NATO mission in Latvia that is serving as a check against Russian aggression in the Baltics.

Macron’s public criticism of the state of the world’s biggest military alliance was rejected by German Chancellor Angela Merkel and NATO Secretary-General Jens Stoltenberg after the two met in Berlin.

“The French president chose drastic words,” Merkel said. “That is not my view of co-operation in NATO and I think that such a sweeping blow is not necessary, even if we do have problems, even if we must pull together.”

U.S. Secretary of State Mike Pompeo also insisted the NATO alliance remains relevant today as he marked the 30th anniversary of the end of the Cold War by visiting a German village that was divided during that conflict.

“I think NATO remains an important, critical, perhaps historically one of the most critical, strategic partnerships in all of recorded history,” Pompeo said.