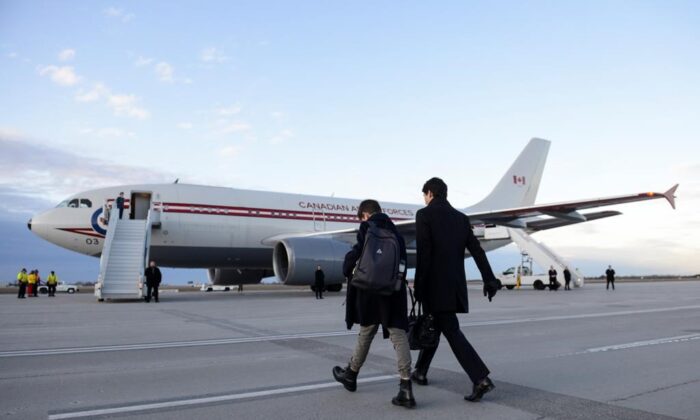 Prime Minister Justin Trudeau and son Xavier depart Ottawa on Dec. 2, 2019. Trudeau flies to London to celebrate the 70th birthday of the NATO military alliance, which is facing questions and uncertainty about how to deal with Russia, China, and its own internal divisions. (The Canadian Press/Sean Kilpatrick)
Updated: 2019-12-02 15:50:17

OTTAWA—Prime Minister Justin Trudeau is off to London where he will spend the next few days trying to give the NATO military alliance a boost amid existential questions about its future—while defending Canada’s own commitment to it.

Leaders from all 29 NATO member states are gathering in London this week to celebrate the 70th birthday of the alliance, which was created at the start of the Cold War to defend North America and Western Europe from the Soviet Union.

More recently, the alliance has fought in Afghanistan, ousted Libyan dictator Moammar Gadhafi’s regime, patrolled for pirates off the Horn of Africa, and established a line of defence in Eastern Europe against Russian aggression.

Canada has been involved in all those efforts and more, including leading a NATO training mission in Iraq and contributing fighter jets to patrol Romanian airspace, and frigates to patrol the Mediterranean and Black Seas.

Yet NATO has also faced pressure in recent years, with members grappling over how to best deal with Russia and China even as U.S. President Donald Trump has raised questions about his country’s commitment to the alliance.

Last month, French President Emmanuel Macron kicked off a sharp debate over NATO’s future when he suggested the military alliance was suffering from “brain death” due to a lack of co−ordination and communication between members.

He specifically cited the U.S. military withdrawal from northeast Syria and Turkey’s subsequent invasion of the area—both without any consultation with fellow NATO members—as examples of a breakdown in the alliance.

There have also been arguments over the amount of money individual members are investing in their militaries, with Trump leading the charge in calling on European allies as well as Canada to step up their spending.

China is also set to figure prominently during the discussions as it has become more assertive in its neighbourhood and around the world—and because of U.S. demands that Canada and others ban Huawei from its 5G networks.

The alliance is also at odds over the best way to deal with Russia, with some members suggesting more dialogue even as others such as Canada take a hard line with it over its actions in Ukraine and elsewhere.

There are also concerns about NATO member Turkey, which has become close to Russia under its increasingly autocratic president, yet sits in a strategically important location bridging Europe with Asia and the Middle East.

It is into this minefield that Trudeau will step, starting with a discussion alongside his Dutch counterpart on Dec. 3 where the Canadian prime minister is expected to tout the importance of NATO to North American, European, and global security.

“In uncertain times, we need strong multilateral institutions like NATO. So we must continue to strengthen them every day. To keep all our citizens safe.”

It’s a message Trudeau is expected to echo.

Yet senior government officials have warned against expecting Trudeau to make any announcements before he returns to Canada on Dec. 4 in time for the resumption of Parliament the following day.

Rather, ensuring the alliance not only survives but adapts and positions itself to face the threats of today and tomorrow is seen as essential to Canada’s own security, given its relatively small size and somewhat isolated position atop the U.S.

Trudeau will also tout Canada’s many contributions to the alliance in the face of U.S. and other concerns about its defence spending, which stands at 1.31 percent of gross domestic product—less than NATO’s agreed−upon target of 2 percent.

The government has instead repeatedly pointed to Canada leading a battle group in Latvia and providing military trainers in Iraq, fighter jets in Romania, and a frigate in the Mediterranean as a better measurement of its contributions.

North Korea's Kim Vows To Be Ready For Confrontation With The U.S.