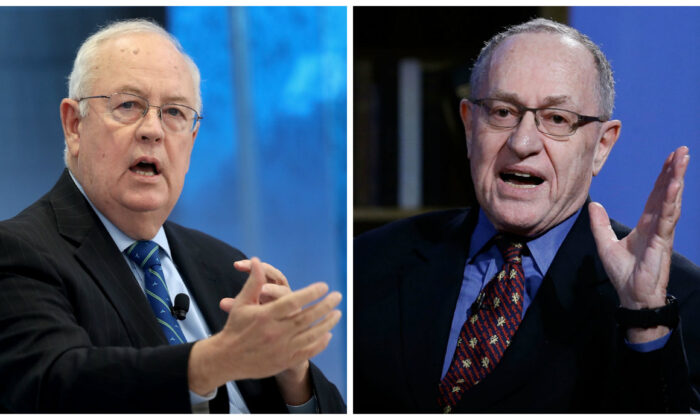 President Donald Trump has announced his legal team ahead of the Senate impeachment trial on Friday, among whom are former Independent Counsel Ken Starr and high-profile lawyer and Harvard Law professor Alan Dershowitz.

The two attorneys are generally known both for their involvement in certain prominent legal cases in recent American history, as well as for their regular appearances on Fox News.

Starr served as lead investigator two decades ago in the impeachment inquiry into former President Bill Clinton. Starr’s investigative report served as the basis for Clinton’s impeachment in the House on charges of perjury and obstruction of justice. The Senate in 1999 acquitted Clinton, a Democrat. Starr had recommended impeachment on 11 grounds.

Dershowitz has been a well-known figure in U.S. legal circles for decades. As a criminal lawyer, he was part of a team of lawyers who worked on former NFL player O.J. Simpson’s murder defense in the 1990s. Dershowitz has also represented former heavyweight boxing champion Mike Tyson; Hearst publishing heir Patty Hearst, who was kidnapped in 1974 by the Marxist terrorist group; Symbionese Liberation Army; and televangelist Jim Bakker.

“While Professor Dershowitz is nonpartisan when it comes to the constitution—he opposed the impeachment of President Bill Clinton and voted for Hillary Clinton—he believes the issues at stake go to the heart of our enduring Constitution,” the team said.

Both Starr and Dershowitz also served as lawyers for financier and convicted sex offender Jeffrey Epstein, who was found dead in his New York jail cell last year, where he was being held on new sex trafficking charges.

A Fox News host said on air that Starr would be parting ways with the network as a result of his role on the legal team, The Associated Press reported.

Trump’s defense team will be led by White House counsel Pat Cipollone and Trump’s private attorney Jay Sekulow, according to the White House.

Also joining the legal team are Trump adviser and former Florida attorney general Pam Bondi; former independent counsel Robert Ray who was part of the Whitewater investigation of the Clintons; Jane Raskin, one of Trump’s private lawyers who was part of the president’s legal team during Mueller’s investigation; and former independent counsel Eric Herschmann of the Kasowitz Benson Torres legal firm, which has represented Trump in numerous cases over the last 15 years.

“President Trump has done nothing wrong and is confident that this team will defend him, the voters, and our democracy from this baseless, illegitimate impeachment,” the White House Press Secretary said in a statement Friday.

“The Articles of Impeachment House Democrats have adopted threaten grave and lasting damage to our institutions and to our Nation. The President looks forward to the end of this partisan and unconstitutional impeachment,” she added. “It’s time for Congress to turn its attention back to the work of the American people and leave sham political investigations like this one in the past.”

The trial in the majority-Republican Senate formally began on Thursday, when senators were sworn in as jurors by Chief Justice John Roberts. The trial will start in earnest on Tuesday with opening statements.

Still to be determined is whether the Senate will allow witness testimony and new evidence or whether senators will decide the case as Senate Majority Leader Mitch McConnell (R-Ky.) has suggested using only the material amassed by House investigators.

The majority-Democrat House of Representatives formally charged Trump on Dec. 18, approving two articles of impeachment (pdf) for abuse of power and obstruction of Congress. No House Republicans voted in favor of the articles, and a small number of Democrats broke with their party to vote against one or both articles.

Republicans control the Senate with a 53-47 majority. A two-thirds supermajority (67 votes) in the Senate is required to convict a president and remove the president from office.

About 20 Republicans would have to break with their party and join the Democratic minority to achieve a supermajority. Meanwhile, a simple majority (51 votes) is required to dismiss the charges against Trump.

Reuters and the Associated Press contributed to this report.