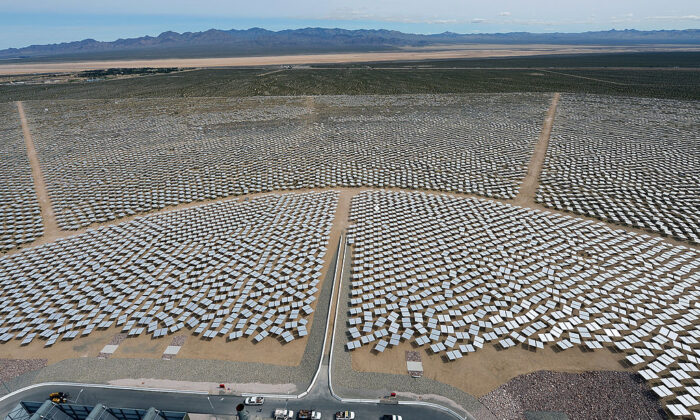 The Ivanpah Solar Electric Generating System, a solar thermal power system that powers some 140,000 homes, in the Mojave Desert in California, on March 3, 2014. A solar project approved by the federal Bureau of Land Management on Jan. 16, 2020, will also make use of California’s desert sun to meet lofty green energy goals, powering an estimated 117,000 homes. (Ethan Miller/Getty Images)
Updated: 2020-01-17 11:10:19

Facing pressure from the California government to facilitate the production of more green energy, the Trump Administration approved the construction of a 3,000-acre solar project on Jan. 16.

The Bureau of Land Management (BLM) approved the Desert Quartzite Solar Project, a subsidiary of First Solar, Inc., to build and operate a 450-megawatt solar project on federally managed public lands. The project site is in Riverside County, not far from the Arizona border.

The project, which has lingered for five years in the permitting stages, is expected to be operational in 2022.

It will mean a private infrastructure investment of $1 billion. It will generate enough electricity to power about 117,000 homes and provide $2.7 million in annual rent and fees to the U.S. Treasury, according to a BLM press release. It will also create 870 jobs at peak construction.

“The Department of the Interior supports moving forward with the Desert Quartzite solar project and other projects that help strengthen communities and promote energy independence,” said Casey Hammond, acting assistant secretary for the Department of Interior’s land and minerals management, in the release. “Responsible domestic energy production on federal lands remains fundamental to our nation’s security.”

The project advances the U.S. Department of the Interior’s America First Energy Plan which calls for energy independence and development on public lands, improving infrastructure and creating jobs in local economies.

While rooftop solar panels on residential and commercial buildings are ideal from an environmental standpoint—because they don’t eat up any additional lands—they don’t provide enough power to meet the state’s renewable energy goals.

Shannon Eddy, executive director of the Large-Scale Solar Association, told The Epoch Times that her organization is advocating for bigger, utility-scale projects.

With the most aggressive renewable energy policies of any U.S. state, she said California needs to step up its game in the arena of solar power production—and fast. As more electricity is used to heat buildings and power vehicles, the state must produce more than four times the amount of electrical power it does now, Eddy said.

Before he left office, former California Governor Jerry Brown signed Senate Bill 100, also called The 100 Percent Clean Energy Act of 2018 which requires that the state fully decarbonize its electricity grid by 2045. His successor, Governor Gavin Newsom, has been pushing for larger solar projects to meet its renewable energy targets.

When asked if the state’s goal is reachable, Eddy offered an optimistic response: “Absolutely. That’s the whole idea. We are increasing renewable energy to reduce the need for natural gas plants. You bet.”

She said projects recently approved by the BLM are a good step toward meeting these targets.

Combined with the project approved Jan. 16, these represent about 1,640 megawatts. That’s about 1–2 percent of the goal for the amount of solar power to be produced by 2045.

Go Back: Science
Previous: Environmental Groups Sue Trump Administration Over Fracking
Next: Report: US Remains the World’s No.1 Spender on Research as China Tries to Close the Gap
source : www.theepochtimes.com
''

Deaths Climb In Louisiana; Delays In Aid For Small Businesses

The Origin Story of Earth's Magnetic Field Remains a Mystery

Italy Is Well Over "The Hump" -- Original Model from 3 Weeks Ago Said 5-11-20 As a Clean Point, Still Looks Perfect