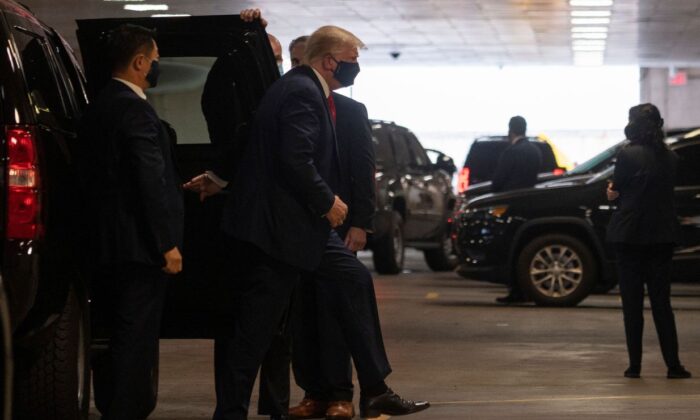 The White House confirmed Robert Trump’s hospitalization, while the president confirmed it in a news conference earlier in the day.

“I have a wonderful brother, we’ve had a great relationship for a long time. He’s in the hospital right now, hopefully he’ll be alright. He’s having a hard time,” Trump said to reporters.

Trump was seen arriving at the hospital by media photographers.

Trump had been scheduled to travel to his club in Bedminster, New Jersey, for the weekend. He made a stop in Manhattan first to see his sibling.

Neither Trump or White House officials said why Robert Trump was in the hospital.

More photos showed Trump’s motorcade arriving in New York City with throngs of police officers. According to The Associated Press, Trump paid a visit to his brother and was wearing a mask to prevent the spread of the CCP (Chinese Communist Party) virus.

Earlier this year, Robert Trump filed a lawsuit against niece Mary Trump, who was set to publish a book about the Trump family. He argued via lawyers that she violated a nondisclosure agreement from about 20 years ago.

“I and the rest of my entire family are so proud of my wonderful brother, the president, and feel that Mary’s actions are truly a disgrace,” Robert Trump told news outlets earlier this year.

The White House described her book as a work of fiction, denying some of the allegations contained within.

Before that, Robert Trump told the New York Post that he supported his brother’s campaign “1,000 percent” in 2016.

Fred Trump Jr., the president’s older brother, died in the early 1980s at the age of 43 after battling alcoholism for years. The early death had an impact on Trump, who said he never drinks because of it.

The White House has not responded to a request for comment. Other details were not provided.