Trump Calls for ‘Honest Vote,’ Says He Won’t Lose Unless ‘They Cheat’ 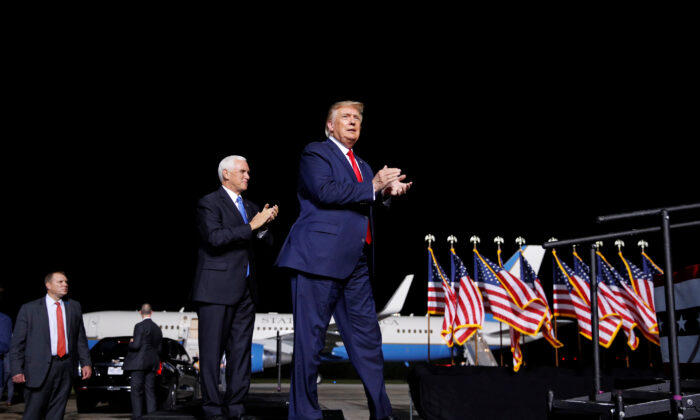 President Donald Trump on Friday said he wants a “friendly transition” of power if he loses to Democratic presidential nominee Joe Biden but told a rally that he won’t lose the upcoming election unless his opposition cheats.

“The only way that we’re going to lose is if there’s mischief. Mischief, and it will have to be on a big scale. So, be careful. We do want a very friendly transition, but we don’t want to be cheated and be stupid and say: ‘oh, let’s transition,'” Trump said during an event in Newport News, Virginia.

“We’ll go and we’ll do a transition, and we know that there were thousands and thousands of ballots that made the difference through cheating. We’re not going to stand for it,” he added.

Democrats say Trump will refuse to leave office even if he loses, pointing to remarks like those that he made during the rally. The Senate unanimously passed a resolution on Thursday committing to a peaceful transfer of power.

“We’ll see what happens,” Trump told reporters in Washington earlier this week, when asked if he would commit to a peaceful transfer of power if he loses. He later said he’d respect a ruling by the Supreme Court, if it came to that.

House Speaker Nancy Pelosi (D-Calif.) responded in her weekly press briefing, saying she wasn’t surprised “because the President has been contemptible of science and governance” but that she has confidence that the institutions in the country will ensure a peaceful transition.

“This is trying to make everybody wonder whether or not the election will be legit,” the Democrat said.

A Pentagon spokesman last month dismissed the idea that the military would involve itself in an election dispute.

Trump has repeatedly criticized the unprecedented transition to widespread mail-in voting, a method used only sparingly in many states in past elections.

Discarded ballots, many cast for the Republican, and trays of mail found in a ditch with absentee ballots are the latest cases promoted by Trump as evidence that the upcoming election will be chaotic, with uncertainty as to who actually won the presidency.

“This is a disaster waiting to happen and the only hope we have really—other than going through a long, unbelievable litigation at the end after it’s over—because we’re going to win, we’re not going to lose this, except if they cheat, that’s the way I look at it. But we can’t let him cheat. We can’t let him, it’s too much,” Trump said, appearing to refer to Biden. “Our country is at stake.”

People who see anything untoward should report it to the authorities and law enforcement officials are “watching all over the place,” the president later said, adding that the results of the election could take months to confirm because of the surge in mail-in voting.