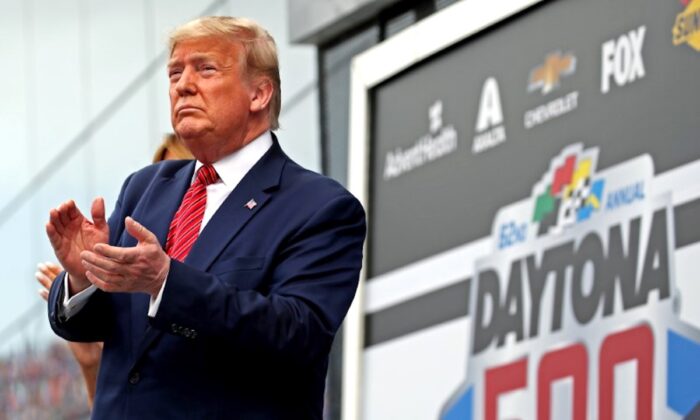 In a boost to his re-election efforts, President Donald Trump appeared at NASCAR’s most prestigious race—the Daytona 500—on Feb. 16 as grand marshal, who is given the honor of commanding drivers to start their engines.

Trump made a dramatic entrance onto the race track riding in the presidential limousine, known as “the Beast,” after giving thousands of fans a flyover of Air Force One. The annual event takes place in the crucial political swing state of Florida.

Thousands cheered and a band played patriotic music when Air Force One flew over the famed track. Donald Trump Jr. and former NASCAR chairman Brian France, who recruited several drivers to attend a Georgia rally for Trump when he was a candidate, were also on the presidential jet.

“The tens of thousands of patriots here today have come for the fast cars and the world class motor sports,” Trump said in his grand marshal speech kicking off the race. “But NASCAR fans never forget that no matter who wins the race, what matters most is God, family and country.”

First lady Melania Trump stood by the president’s side as he gave his remarks, during which he praised gold star families and thanked their loved ones who “made the supreme sacrifice to defend our freedom and our flag.”

The president gave a shoutout to the U.S. military and highlighted his efforts to rebuild it. His new budget requests $740.5 billion for national defense in 2021, an increase of $2.5 billion over the 2020 enacted level.

“To every service member and veteran here today as commander in chief of the greatest fighting force on the planet—a force that just spent $2.5 trillion on rebuilding our military—I want to thank you for your service,” he said.

The president said the drivers are competing for “pure American glory.” He described the Daytona 500 as “a legendary display of roaring engines, soaring spirits, and the American skill, speed, and power that we’ve been hearing about for so many years.”

He later kicked off the race and bellowed out the iconic line: “Gentlemen, start your engines!” Trump then, for the second time, took a few laps around the Daytona International Speedway in his presidential motorcade, this time leading NASCAR drivers.

According to Trump’s 2020 campaign manager, Brad Parscale, “NASCAR fans are patriots who support the president in huge numbers, so we definitely wanted to communicate directly with them about Keeping America Great during the Great American Race.”

The crowd of Daytona fans were largely enthusiastic over Trump’s appearance, according to The Associated Press, with some fans draping themselves in Trump 2020 banners and other Trump apparel.

Previous presidents who have attended NASCAR events at the speedway include Ronald Reagan, George H.W. Bush, and George W. Bush. Before Trump attended the race he posted on Twitter, “Getting ready to go to the Daytona 500. Will be GREAT!”

Florida is one of a handful of U.S. states that swing between Democrat and Republican in presidential elections. Trump won the state, where he has golf courses and a home that is now considered his primary residence, in his race against former Secretary of State Hillary Clinton in 2016.

Trump is planing a round of fundraising events and political rallies in western states later. He spent the weekend at his Mar-a-Lago resort in Palm Beach.

Meanwhile, the field of 2020 Democratic candidates, which has recently narrowed further, sought to make their voices heard on Sunday’s national television circuit as the Nevada Democratic caucuses approach.

The Associated Press and Reuters contributed to this report.