Trump Denies Asking to Get His Face Onto Mount Rushmore 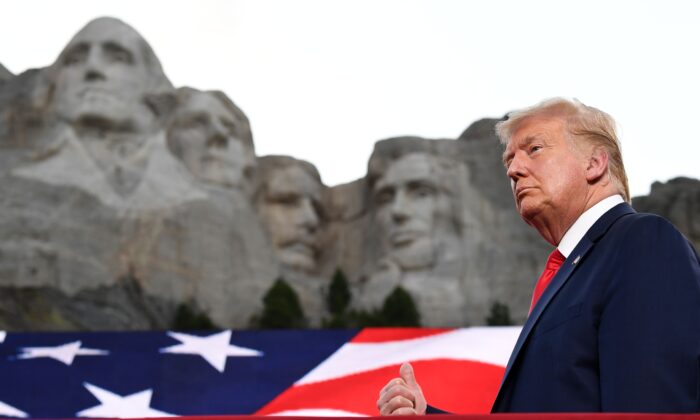 President Donald Trump denied a recent New York Times report claiming he suggested having his face added to Mount Rushmore, although he admitted he felt his governance record would make him worthy of such an honor.

Citing an anonymous Republican source, The New York Times reported on Aug. 8 that a White House official inquired with the office of South Dakota Gov. Kristi Noem about how another president, implicitly Trump, could get their likeness carved onto the famous landmark. The report also claimed that when Trump visited South Dakota for Independence Day celebrations, Noem greeted the president with a four-foot replica of Mount Rushmore that included his face.

Trump took to Twitter on Sunday to insist he never suggested putting his face on the historical landmark and denounced the report as “Fake News.”

“This is Fake News by the failing @nytimes & bad ratings @CNN. Never suggested it although, based on all of the many things accomplished during the first 3 1/2 years, perhaps more than any other Presidency, sounds like good idea to me!” Trump wrote.

Trump’s interest in having his face carved into Mount Rushmore has on earlier occasions been the subject of speculative reporting, while the president has toyed with the idea of being immortalized on the iconic landmark.

In a speech in Youngstown, Ohio, in 2017, Trump said that even if he raised the issue in jest, it would be met with an outpouring of critical headlines. “I’d ask whether or not you think I will someday be on Mount Rushmore, but, no—here’s the problem. If I did it joking, totally joking, having fun, the fake-news media will say, ‘He believes he should be on Mount Rushmore!'” Trump said. “So I won’t say it, okay? I won’t say.”

Trump then said even alluding to the idea would spark an outcry.

“They’ll say it anyway tomorrow: ‘Trump thinks he should be on Mount Rushmore. Isn’t that terrible?’ What a group. What a dishonest group of people, I’ll tell you,” the president added.

Trump leveraged the iconic symbolism of Mount Rushmore in a speech during a July 4th rally at the foot of the landmark, saying, “There could be no better place to celebrate America’s independence than beneath this magnificent, incredible, majestic mountain and monument to the greatest Americans who have ever lived.”

Denouncing “Cancel Culture” as part of a wave of “far-left fascism” that involves people “determined to tear down every statue, symbol, and memory of our national heritage,” Trump vowed he would protect the monument.

“This attack on our liberty, our magnificent liberty, must be stopped, and it will be stopped very quickly,” Trump said.

Trump’s likeness on the mountain has been the subject of many internet memes and even a petition on Change.org, which features a doctored image of Mount Rushmore with Trump’s face in place of that of Theodore Roosevelt.

Claiming “he offers ordinary Americans hope to make America greater than ever before,” the petition calls Trump a “personification of the American dream” and urges people to sign onto putting “Donald Trump’s face on Mount Rushmore.”

In the four years since its launch, the petition has garnered just over 6,400 signatures.

Follow Tom on Twitter: @OZImekTOM
Go Back: US News
Previous: Arson Rumors Rage Along With Apple Fire
Next: Donald Trump Considered Dropping Mike Pence From The Ticket For This Republican
source : www.theepochtimes.com
''