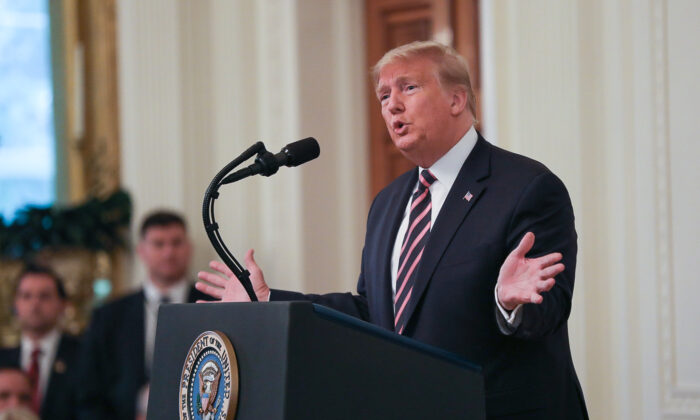 President Donald Trump speaks a day after being acquitted in two articles of impeachment, in the East Room of the White House in Washington on Feb. 6, 2020. (Charlotte Cuthbertson/The Epoch Times)
Updated: 2020-02-06 14:30:18

President Donald Trump said the Kansas City Chiefs are heading to White House as soon as next week after winning the Super Bowl.

Trump said the team will be going to the White House soon, and he expects every team member to attend.

“The Super Bowl champions are coming, I think next week,” Trump told a crowd at the White House on Thursday afternoon. “Soon. Very soon. Every one of them want to be here. And the coach loves us. The coach is great. Andy Reid.”

If the Chiefs team members attend, it would be the first Super Bowl-winning NFL team to go to the White House under the Trump administration. Prior winners, including the New England Patriots and Philadelphia Eagles, didn’t go.

Reid, the head coach of the Chiefs, told reporters earlier this week would be “quite an honor” to be at the White House.

“I’ll be there. If they’re inviting us, I’ll be there,” he told reporters in Miami, adding that he “hadn’t even thought” about going there.

Several other players, including wide receiver Tyreek Hill, also indicated they would like to attend. It “would be great to go to the White House,” Hill remarked before adding that “I’ve never been to D.C., so that would be great,” reported the Kansas City Star.

In 2018, Trump retracted an invitation for the then-Super Bowl champion Eagles team after some players said they would skip the visit amid a season’s worth of national anthem protests. The Patriots also didn’t attend both times they won the Super Bowl in 2017 and 2019,  respectively. And the NBA’s Golden State Warriors haven’t visited the White House after they won two championships under his term.

The Chiefs defeated the San Francisco 49ers 31-20, while quarterback Patrick Mahomes was named Super Bowl Most Valuable Player. “When I became the starter for Kansas City, the first thing I wanted to do was bring the Lamar Hunt trophy back to … this organization,” Mahomes told a crowd during their victory parade.

Gamechangers in Box-Office History: When âTitanicâ Proved Its Dominance, Once and For All

Krzysztof Penderecki Dies: Influential Composer With Music in ‘The Shining’ and ‘Twin Peaks’ Was 86

John Callahan of Soap Opera ‘All My Children’ Dead at 66