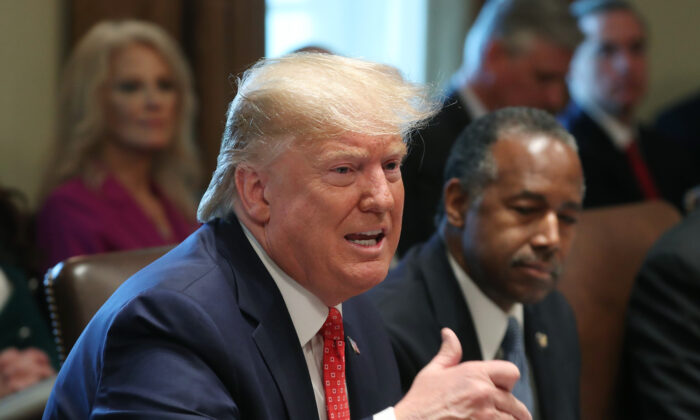 In a letter sent to House Speaker Nancy Pelosi (D-Calif.) and President Pro Tempore of the Senate Chuck Grassley (R-Iowa), Trump noted that he sent troops to the Middle East over the summer “to protect United States interests and enhance force protection in the region against hostile action by Iran and its proxy forces.”

“Iran has continued to threaten the security of the region, including by attacking oil and natural gas facilities in the Kingdom of Saudi Arabia on September 14, 2019,” Trump wrote.

“Additional forces ordered to deploy to the Kingdom of Saudi Arabia include radar and missile systems to improve defenses against air and missile threats in the region, an air expeditionary wing to support the operation of United States fighter aircraft from the Kingdom of Saudi Arabia, and two fighter squadrons. The first of these additional forces have arrived in Saudi Arabia, and the remaining forces will arrive in the coming weeks,” Trump said.

When the additional forces are fully deployed there will be about 3,000 troops in Saudi Arabia. They will stay deployed for as long as necessary, Trump said.

“I have taken this action consistent with my responsibility to protect United States citizens at home and abroad and in furtherance of United States national security and foreign policy interests, pursuant to my constitutional authority to conduct United States foreign relations and as Commander in Chief and Chief Executive. I am providing this report as part of my efforts to keep the Congress informed, consistent with the War Powers Resolution (Public Law 93-148). I appreciate the support of the Congress in these actions,” the president wrote in the Nov. 19 letter.

Neither Pelosi nor Grassley has replied to the letter as of yet.

Trump’s order came amid widespread protests in Iran after the country’s leaders imposed rationing measures and raised fuel prices. Iran cracked down on the protests, killing at least 106 people, according to Amnesty International.

The order also came a day after Secretary of State Mike Pompeo announced the cancellation of one of four sanctions waivers.

The waivers let companies based outside Iran work with the country’s civilian nuclear program without repercussions from the United States.

Pompeo said the waiver for the Fordow Fuel Enrichment Plant site would be eliminated on Dec. 15.

“The right amount of uranium enrichment for the world’s largest state sponsor of terrorism is zero,” he told reporters in Washington. “There is no legitimate reason for Iran to resume enrichment at this previously clandestine site. Iran should reverse its activity there immediately.”