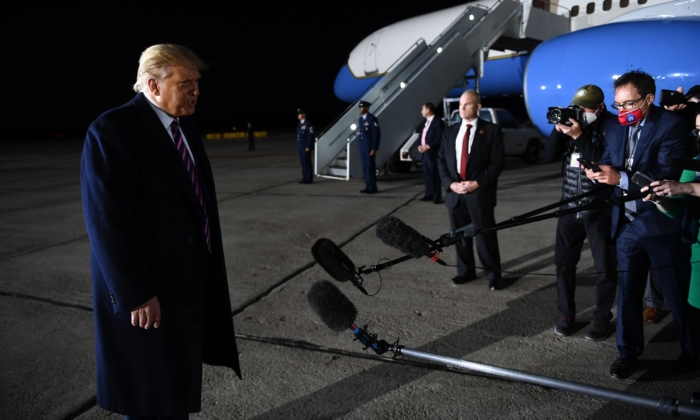 President Donald Trump speaks to the media as he reacts to the news of the death of US Supreme Court Justice Ruth Bader Ginsburg on the tarmac of Bemidji Regional Airport after addressing supporters during a "Great American Comeback" rally at in Bemidji, Minn., on Sept. 18, 2020. (Brendan Smialowski/Getty Images)
Updated: 2020-09-19 01:50:02

Ginsburg passed away on Friday evening surrounded by her family in her home in Washington, according to a statement from the Supreme Court. She died of complications from cancer, which she has battled for years.

“Justice Ginsburg led one of the great lives in the history of American law,” Attorney General William Barr said in a statement. “She was a brilliant and successful litigator, an admired court of appeals judge, and a profoundly influential Supreme Court Justice. For all her achievements in those roles, she will perhaps be remembered most for inspiring women in the legal profession and beyond.”

Senate Majority Leader Mitch McConnell (R-Ky.) said on Friday that Trump’s nominee to fill the seat left vacant by Ginsburg will get a vote on the Senate floor.

“President Trump’s nominee will receive a vote on the floor of the United States Senate,” McConnell said in a statement.

Days before her death, Ginsburg dictated a wish to her granddaughter that she will “not be replaced until a new president is installed,” according to NPR. Her wish will likely figure in the debate that’s likely to ensue if Trump goes forward with appointing a new Supreme Court justice before the election on Nov. 3.

Trump, apparently unaware of the news of Ginsburg’s death, twice brought up Supreme Court appointments as he spoke at the rally in Minnesota. Some people in the crowd shouted that Ginsburg has passed by the president didn’t appear to have caught what was said.

“We will nominate judges and justices who will interpret the Constitution as written,” Trump said. “That’s why the Supreme Court is so important. The next president will get one, two, three, or four Supreme Court justices.”