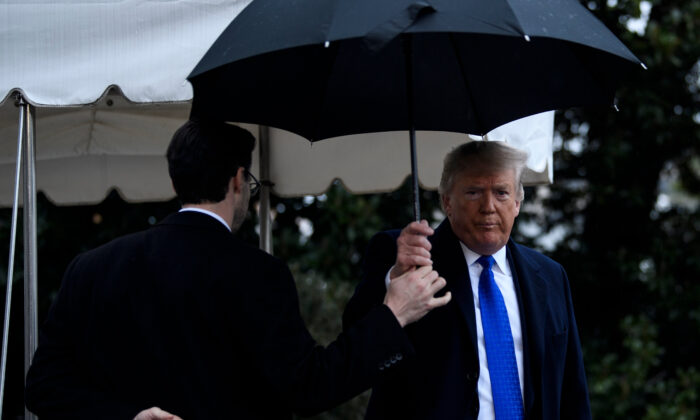 The legislation “doesn’t make it better, but we’ll see what happens,” Trump said while talking with White House reporters while departing for a NATO summit in London.

Last week Trump signed two bills in support of the pro-democracy movement in Hong Kong, including the Hong Kong Human Rights and Democracy Act which includes provisions that create sanctions on Chinese officials involved in human rights abuses in the city.

Several officials, including White House advisor Kellyanne Conway, have expressed hope that the two largest economic powers would come to a “phase one” trade agreement by the end of the year, a major part of which would focus on agricultural purchases by China and intellectual property protections.

“The Chinese are always negotiating. I’m very happy where we are,” Trump said. “The Chinese want to make a deal. We’ll see what happens,” he said without indicating the likelihood of reaching a trade deal by year end.

Meanwhile, a Chinese state-run newspaper said that Beijing has made tariff rollbacks a priority as part of the interim trade deal.

“China wants tariffs to be rolled back in the phase one trade agreement, which would be the first step to cancel the tariffs that have been imposed by the two sides since last year,” The Global Times said in a Dec. 1 commentary.

“Rolling back tariffs levied by the US is a must,” he wrote on Dec. 1, stressing that it is a necessary “compromise” for the U.S. side to “show sincerity.”

Earlier in November, the regime also publicly pressed the U.S. administration to reduce tariffs currently imposed on hundreds of billions of dollars worth of Chinese goods. But Trump declined the request.

“They’d like to have a rollback. I haven’t agreed to anything,” Trump said on Nov. 8. “China would like to get somewhat of a rollback—not a complete rollback, because they know I won’t do it.”

On Dec. 15, the United States is set to impose a 15 percent tariff on roughly $156 billion of Chinese imports.

“If nothing happens between now and then [Dec. 15], the president has made quite clear he’ll put the tariffs in – the increased tariffs,” Secretary of Commerce Wilbur Ross told Fox on Dec. 2.