Trump Says ‘Masks Are Good,’ Calls on Americans to Wear Them 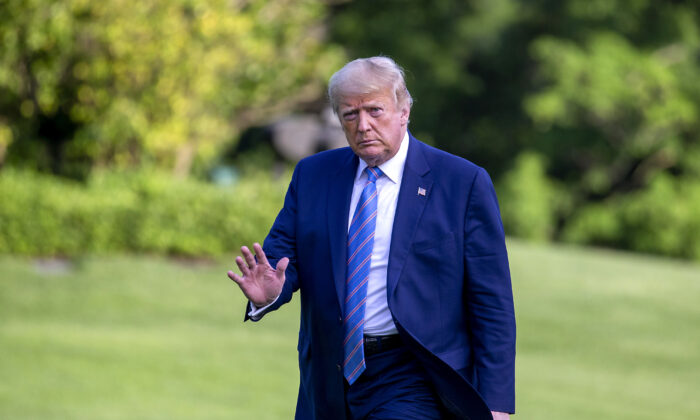 “I’m all for masks. I think masks are good,” Trump told Fox News Business, adding that he doesn’t necessarily support a nationwide mandate for Americans to wear masks. There are “many places in the country where people stay very long distance,” Trump said.

It comes after senior Republicans have called on Americans to start wearing masks as infections rise and as some health experts warned that the pandemic would persist for months.

“If I were in a group of people and I was close, I would. I have. People have seen me wearing one, if I’m in a group of people where we’re not 10 feet away,” the president said. “Usually I’m not in that position and everyone’s tested because I’m the president and they get tested before they see me, [but] if I were in a tight situation with people, I would absolutely,” he added.

Trump said people “should” wear the masks if they “feel good about” doing so.

The president was also asked if he would wear a mask in public. Trump said he wouldn’t commit to it but wouldn’t rule it out.

“I’d have no problem. Actually I had a mask on and I said I liked the way I looked. I thought it was OK,” Trump said. “It was a dark black mask and I thought it looked OK. It looked like the Lone Ranger, but I have no problem with that,” he continued.

“We must have no stigma, none, about wearing masks when we leave our homes and come near other people,” McConnell said on the floor of the Senate. “Wearing simple face coverings is not about protecting ourselves, it is about protecting everyone we encounter.”

“In fact, the more we dislike the pain and suffering caused by the strict stay-home guidelines a few months ago, the happier we should be to take reasonable small steps every day to ensure our country can stay on offense against the virus,” McConnell added.

Texas, Arizona, California, and Florida have been singled out by Vice President Mike Pence for the surge in new CCP (Chinese Communist Party) virus cases, saying in remarks this week that they account for about 50 percent of new patients.

“Roughly 50 percent of all the new cases are taking place in four states,” Pence said. He added that the White House pandemic task force is “particularly focusing on the four states that are generating the majority of the cases which, of course, are California, Arizona, Texas, and Florida.”

The COVID Tracking Project said that states have reported more than 50,000 new cases of the CCP virus, which emerged in China last year, on Wednesday. However, it noted that the seven-day average for deaths was “almost unchanged” at 520. In early May, there were around 1,500 to 2,500 deaths each day across the United States.