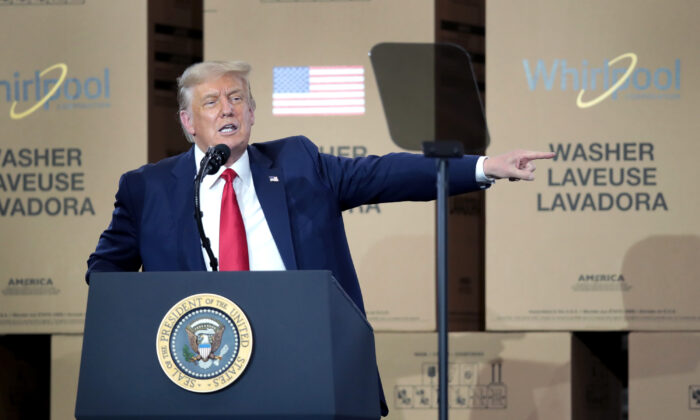 WASHINGTON—In response to supply disruptions caused by the pandemic, President Donald Trump signed an executive order Aug. 6 in Clyde, Ohio to ensure essential medicines, medical supplies, and equipment are made in the United States.

Speaking at Whirlpool Corporation’s manufacturing facility in northwest Ohio, Trump said “we’ll end reliance on China just like we did with the washers and dryers.”

“As we celebrate Whirlpool’s 109-year legacy of American Manufacturing excellence, today I want to lay out my vision to bring millions more jobs and thousands more factories back to American shores, where they belong.”

In 2018, Trump imposed tariffs on imported washers to help domestic manufacturers like Whirlpool, a Michigan-based manufacturer.

As a result of tariffs, Trump said Whirlpool’s nine factories across the country have thrived.

“During the course of the next four years we will bring our pharmaceutical and medical supply chains home,” Trump said. “We cannot rely on China and other nations across the globe.”

In order to prevent medical supply chain disruptions in the future, Trump signed the executive order called “Combating Public Health Emergencies and Strengthening National Security by Ensuring Essential Medicines, Medical Countermeasures, and Critical Inputs are Made in the United States.”

The broad executive order covers both medicines as well as medical supplies such as masks, gloves, goggles, and medical equipment like ventilators.

It has three components, which include the “Buy American” order to ensure that government agencies, including the departments of Veterans Affairs, Health and Human Services, and Defense, buy American products.

The order aims to increase government demand for U.S.-made products to help create a market for manufacturers to invest and to produce in the United States.

The second component of the order is deregulation, which ensures the Food and Drug Administration (FDA) and the US Environmental Protection Agency (EPA) ease rules for the development of advanced manufacturing facilities in the United States.

This will help create “a more rational and streamlined regulatory process” to address national security threats in a timely fashion, according to White House trade adviser Peter Navarro who briefed reporters earlier about the executive order.

And the third component of the order, which is critical to keep drug prices down is “to catalyze advanced manufacturing and continuous manufacturing techniques,” Navarro said. The objective is to create economies of scale and scope to help reduce the cost of production in the United States.

Besides essential medicines, medical countermeasures are also a key part of this order as they are crucial to fight national security threats including chemical, biological, radiological, and nuclear (CBRN), as well as pandemic threats.

In addition, the executive order will help combat the trafficking of counterfeit medicines coming primarily from China.

In a campaign-style speech in Ohio, Trump criticized previous administrations for letting “foreign nations steal our jobs, loot our factories, and plunder the crown jewels of the U.S. economy.”

“The Obama-Biden Administration was perfectly happy to let China win, your jobs disappear, and your factory close,” he said.

Besides the medical supply chains, Trump said he would take similar actions to onshore manufacturing across other critical sectors, including electronics, machine tools, shipping, aerospace, autos, iron, and steel.

The pandemic has disrupted the U.S. pharmaceutical industry’s global supply chain that is largely dependent on China, calling attention to a dangerous level of dependence by the United States on this global competitor.

China is the dominant supplier of thousands of medicines found in U.S. homes and hospitals, from antibiotics to chemotherapies, from HIV/AIDS drugs to antidepressants and painkillers. That’s made the United States vulnerable to supply chain disruptions arising from the pandemic.

China also has a dominant market share in personal protective equipment, such as masks, respirators, surgical gowns, and gloves, which are currently in high demand. During the pandemic, countries, where production facilities are located, have imposed export restrictions for critically needed items, which has alarmed the U.S. government.

Trump’s new executive order will help “jumpstart domestic manufacturing of critical drugs and their components,” according to Rosemary Gibson, the co-author of the book “China Rx” and a senior adviser at the Hastings Center, a bioethics research institute.

“The United States had shortages of critical drugs for more than 20 years under Democratic and Republican administrations,” she said. “And nobody did anything about that for years.”

Top 20 Tweets from BadBlue Tonight, 09.23.20: If We Simply Act on Emotion or Outrage Edition