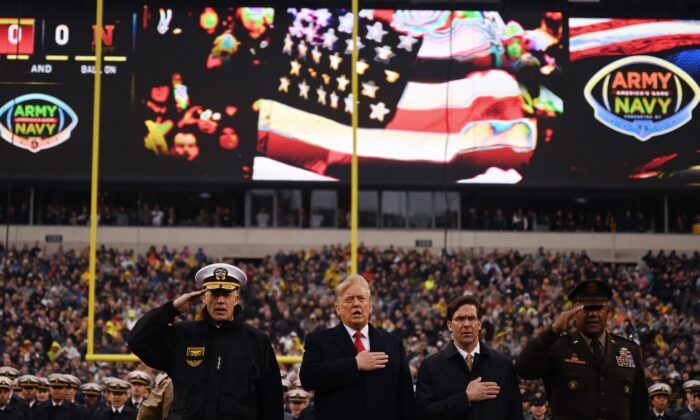 President Donald Trump pitched a new administration policy at the annual Army-Navy football game on Dec. 14 that clears the way for U.S. military academy athletes to be eligible to play professional sports after graduation.

The changes would delay the active-duty service obligations of academy athletes who are considering a career in professional sports. Trump said he was giving athletes with professional potential the chance “to make a fortune and after you’re all finished with your professional career, you’ll go and you’ll serve and everybody’s thrilled.”

Turning to Army coach Jeff Monken, the president joked that, “it probably gives the coach no reason to ever lose another game.”

Athletes wanting to go pro must first get approval from the Pentagon chief, according to the memo, which was obtained by The Associated Press. Athletes must also fulfill their military obligation eventually, or repay the cost of their education, per the new guidelines.

If approved by the defense secretary, the athlete must agree to return to the military and serve out their commitment, which is usually five years. While playing in the pros, the athlete’s waiver would be reviewed annually.

If the athletes don’t pass required medical standards when it’s time to rejoin the military, they will be “encouraged” to serve in a civilian post within the department for no less than five years, or be subject to repayment of their school expenses, according to Esper’s memo.

Trump made the day trip to Philadelphia for the second year in a row for the storied game. He is the 10th commander in chief to attend the contest. This year, he was accompanied by Esper and the chairman of the Joint Chiefs of Staff, Gen. Mark Milley.

The president has been a staunch supporter of the military, promoting increases in defense spending and overseas triumphs such as the October killing of ISIS leader Abu Bakr al-Baghdadi in Syria.

Secretary of State Mike Pompeo affirmed in a Nov. 14 speech that the United States will continue to fight the ISIS terrorist group, noting that they’re watching the space previously occupied by the caliphate “like a hawk.” He called the battle “a test of civilization against barbarism.”

David Robinson, who rose to fame playing basketball on the Naval Academy’s men’s basketball team, became eligible for the 1987 NBA draft, when he was selected by the San Antonio Spurs with the first overall pick. Robinson, however, had to wait two years because he had to fulfill his active-duty obligation with the Navy.

Robinson went on to spend his entire career in San Antonio, where he led his team to two NBA championships. He also made history by becoming the first male basketball player to play on three U.S. basketball teams in the Olympic Games.

The biggest service-academy success story in the NFL is Roger Staubach, who went from Heisman Trophy-winning quarterback with Navy to the Hall of Fame as a member of the Dallas Cowboys. Before joining the Cowboys, he spent four years serving in the armed forces, including a tour of duty in Vietnam.